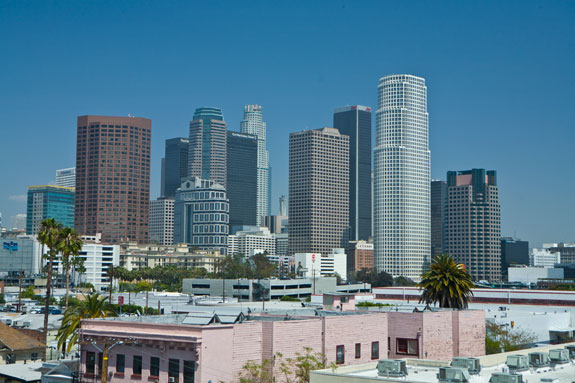 As the nation’s second-largest city, Los Angeles has everything to offer – and then some.

Hollywood glamour. Surfing. Spectacular sunsets. Entertainment powerbrokers. Financial titans. Gourmet food trucks. As the nation’s second-largest city, Los Angeles has everything to offer – and then some.

The City of Angels does things big. It’s the largest city in the country by land mass. Inside its larger-than-life boundaries are a wide range of offerings, from mountain hikes to beach strolls to art walks and everything in between.  Case in point: Its fabled Griffith Park – which features hiking paths within the shadow of the Hollywood sign, two public golf courses and the recently refurbished Griffith Park Observatory, featured in the classic James Dean movie Rebel Without a Cause – is the largest city park in the country.

Los Angeles is world-famous for its cultural offerings, which include the Getty Center museum perched on a Bel Air peak, the sprawling Los Angeles County Museum of Art and the cutting-edge Museum of Contemporary Art. And while LA is famous for film, it rivals Broadway in its offerings on stage. Stars abound in places like the Ahmanson Theater, Broad Stage and Geffen Theater. For music, the Los Angeles Philharmonic and major touring acts perform in such venues as the Hollywood Bowl and the Walt Disney Concert Hall. Smaller acts on the rise perform in legendary establishments like the Troubadour.

For seaside attractions, LA knows no rival. Malibu features some of the finest surfing in North America. Farther south, the Santa Monica Pier and Venice Boardwalk offer the best in beachfront entertainment. The beach towns of Manhattan Beach and Hermosa Beach offer laid-back nightlife, as well as some of the most beautiful paths for cruising by bike.

In the corporate world, LA means business. The downtown skyline is dotted with the marquees of Fortune 500 companies that call the city home for their national or regional headquarters. Some of the largest companies headquartered in LA include the DIRECTV Group, Occidental Petroleum, Dole Food, Mattel, Activision Blizzard and Northrop Grumman. The laundry list of entertainment conglomerates based in LA is too long list but includes such storied entities as the Walt Disney Company and 20th Century Fox.

While many students live downtown near campus, Loyola’s transportation incentive programs give students the advantage of living just about anywhere they choose. From downtown to the beach to historic Echo Park and even neighboring Orange County, Loyola makes commuting easy and affordable. Located a short shuttle ride away from downtown LA’s 7th Street/Metro Center station, Loyola Law School offers its students significant discounts on public transportation. Students are also eligible for car-pool programs with significant breaks on school parking rates.