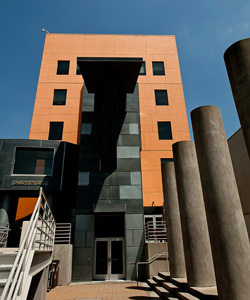 With its bright orange façade, the Casassa building is hard to miss. “Casassa is the most flamboyant building on campus, with its sheet metal wedge hovering four stories in the air supported by an arm that looks like it could be on a hinge. I can’t help seeing is as a castle gate about to slam down, but whatever it suggests it is a unique fantasy that had not appeared before in architecture.”*

The Casassa building is adjacent to the library. Its second, third and fourth floors make up the library's Darling Pavilion, which holds legal periodicals. Darling Pavilion can be accessed from Rains library by using a skybridge linking the two buildings. Casassa is also home to the campus bookstore, several classrooms and administrative offices. The Center for Conflict Resolution and the Center for Juvenile Law and Policy are also there.

Prev: Fritz B. Burns Academic Center | Next: Chapel of the Advocate