Loyola Project for the Innocent Secures Second Exoneration of 2017 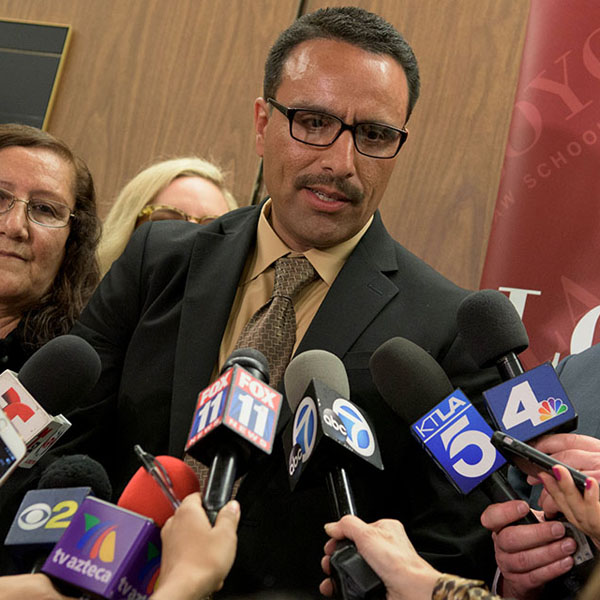 Marco Contreras was released Tuesday, March 28, 2017, after serving 20 years of a life-plus-seven years sentence for a wrongful conviction of attempted murder and robbery.

Loyola Law School, Los Angeles Project for the Innocent client Marco Contreras was released Tuesday, March 28, 2017, after serving 20 years of a life-plus-seven years sentence for a wrongful conviction of attempted murder and robbery. The news came less than two weeks after the LPI successfully petitioned for the release of client Andrew Leander Wilson, who spent 32 years in jail for a murder he did not commit.

“We are thrilled that our client has been found factually innocent and that the court is planning to order his immediate release,” said LPI founder Laurie Levenson, who has represented Contreras since 2012, along with LPI Program Director Adam Grant.

Contreras’ conviction occurred after an eyewitness inaccurately identified him as the assailant in an alleged attempted murder and robbery. The eyewitness said she saw Contreras commit a shooting at a gas station in Compton in 1996, but Contreras was at home sleeping at the time.

“Erroneous eyewitness identifications account for about 75 percent of all wrongful convictions in the U.S.,” said Paula Mitchell, LPI legal director.

Since his arrest, Contreras has steadfastly maintained his innocence and fought to have his case re-investigated. Loyola’s Project for the Innocent took his case. After LPI students and attorneys presented the case to the Los Angeles District Attorney’s Office Conviction Review Unit, that office agreed to supervise an independent investigation into the shooting.

Working with its own team of investigators and special investigators from the Los Angeles County Sheriff’s Department, the District Attorney’s Office has not only been able to confirm that Contreras is innocent, but has arrested the parties suspected of actually committing the offense.

Contreras has been supported in his effort to prove his innocence by his family, appellate counsel, an investigating detective on his case, and Ricardo Perez, Esq., a 2010 Loyola alumnus who helped Contreras’ family bring the case to Loyola’s Project for the Innocent.

Now 41 years old, Contreras is looking forward to putting his life back together.

The Project for the Innocent (LPI) pursues claims of actual innocence on behalf of those wrongfully convicted of crimes. Students work under the supervision of founder Laurie Levenson, David W. Burcham Professor of Ethical Advocacy; Legal Director Paula Mitchell; Program Director Adam Grant and other supervising attorneys. Since 2011, the LPI has secured the release of three clients who served a collective 83 years in prison for murders they did not commit. They include Andrew Leander Wilson (2017 release after 32 years in prison), Kash Delano Register (2013 release after 34 years in prison), and Obie Anthony (2011 release after 17 years in prison). Learn more at www.lls.edu/ProjectfortheInnocent .