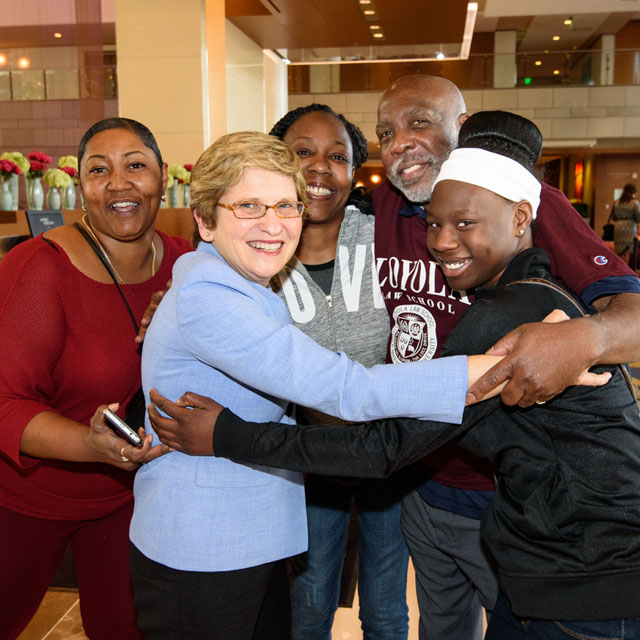 After spending more than 32 years behind bars for a murder he did not commit, client Andrew Leander Wilson was released on Thursday, March 16, 2017 from L.A.’s Men’s Central Jail.

After spending more than 32 years behind bars for a murder he did not commit, Loyola Law School, Los Angeles Project for the Innocent (LPI) client Andrew Leander Wilson was released Thursday, March 16, 2017 from L.A.’s Men’s Central Jail.

Wilson was ordered released at a March 15, 2017 hearing conducted by Judge Laura Priver, who found that Wilson’s constitutional rights had been violated as a result of the prosecution’s withholding of exculpatory evidence and unreliability of the single eye-witness. The hearing came as a result of more than two years of legal work by LPI attorneys and students, who conducted interviews and drafted court filings to help substantiate the violations.

During the hearing, the Los Angeles District Attorney’s Office announced it no longer had confidence in Wilson’s conviction. The DA has stated it will not re-try Wilson, who was originally arrested on Dec. 2, 1984 for a murder that allegedly occurred on Oct. 23, 1984.

“Numerous due process violations that recently came to light show conclusively that Mr. Wilson did not receive a fair trial,” said Paula Mitchell, Legal Director of the Loyola Law School, Los Angeles Project for the Innocent, and counsel for Wilson. “Mr. Wilson has maintained his innocence from the day he was arrested in 1984. He has never wavered and never stopped fighting to prove his innocence.”

Loyola Project for the Innocent students and attorneys welcomed Wilson when he regained his freedom. Those available for comment include Professor Laurie Levenson, LPI founder; Legal Director Paula Mitchell; and Program Director Adam Grant, along with LPI students and Wilson’s daughter and granddaughter.

Photos of the release-order hearing, held at 8:30 a.m. on March 15, 2017, in Dept. 125 on the 15th floor of the Clara Shortridge-Foltz Criminal Courts Building, are available to media covering the story at https://lmu.box.com/s/fctei10otke83qxe46pbyld5fs1f59kb. Media outlets may publish the photos provided they credit Moses Parks/Loyola Law School, Los Angeles. The same link contains a copy of the LPI’s traverse filing, which details the constitutional due process violations that triggered Wilson’s order of release.

Wilson, 62, plans to return to St. Louis, where he can spend time with his mother, Margie Davis, who will turn 97 on May 1, and who has doggedly advocated on behalf of her son since the day he was arrested.

“Mrs. Davis’s commitment to seeing her son released from prison and exonerated is truly remarkable. She has been right by his side every step along the way for the last 32 years,” said Adam Grant, Loyola Project for the Innocent’s Program Director.

A press conference is expected to be held on Loyola Law School’s downtown L.A. campus the week of March 20, 2017; details will be distributed to members of the media.

The Project for the Innocent (LPI) pursues claims of actual innocence on behalf of those wrongfully convicted of crimes. Students work under the supervision of founder Laurie Levenson, David W. Burcham Professor of Ethical Advocacy, Executive Director Paula Mitchell and other supervising attorneys. In 2013, LPI attorneys and students helped secure the release of Kash Delano Register, who served 34 years in prison for a murder he did not commit. In 2011, Project for the Innocent students helped secure the release of Obie Anthony, who murder who served 17 years of a life sentence. The project investigated the cases, helped draft the petition and participated in the 2011 evidentiary hearing. Learn more at www.lls.edu/ProjectfortheInnocent.