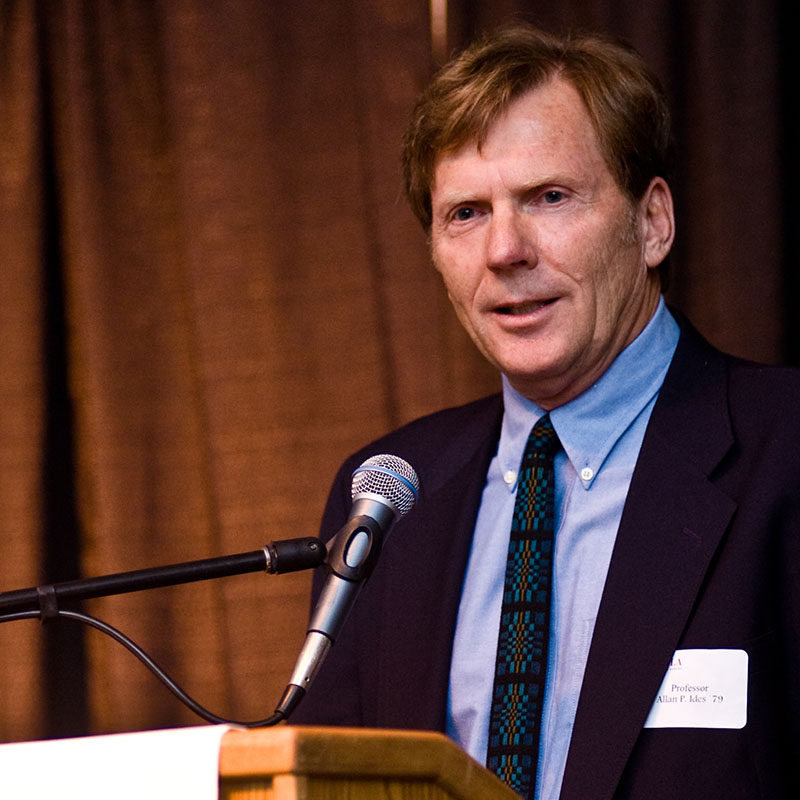 Allan Ides ’79 already was an expert on the processes of the U.S. Supreme Court by the time he argued a pivotal Confrontation Clause case in front of the justices in 1988. As a clerk to Associate Justice Byron R. White from 1980-81, Ides was a first-hand witness to the inside operations of the Court.

“You experience the whole process,” said Ides, the Christopher N. May Professor of Law at Loyola. “You learn how cases are decided by the Court, from the initial petition for review to the final opinion of the Court. You see how opinions are written, revised, and sometimes withdrawn. It’s a small operation: nine justices with four clerks and the clerks bear witness, either directly or indirectly, to each step of the process.”

During his year in Washington, D.C., Ides saw a side of the Supreme Court not always evident in its opinions. Ides found a court that was, ultimately, an intimate institution. “You’re involved with the cases from the time the petitions are filed. You get to interact with the your justice and see how decisions are actually made,” he said. “You come to understand how the individual justices think, and you might even go to lunch with some them. You obtain a highly realistic perspective of the operation of the court.”

Now a veteran professor of Civil Procedure and Constitutional Law, who has authored multiple casebooks with Professor Emeritus Chris May and Professor Simona Grossi, Ides frequently draws on his Supreme Court experience in the classroom. “It has a profound influence on how I teach,” he said. “You don’t approach teaching as if your word is absolute. It’s a process of thinking and analysis. You become much more pragmatic, and you understand that’s what lawyers have to do.”

As a professor, Ides has continued to litigate cases as a pro bono attorney. He has represented clients on immigration and other issues. In 1988, he argued the case of U.S. v. Owens at the U.S. Supreme Court alongside Professor Stan Goldman ’75.

For Ides, the inspiration to pursue the country’s most coveted clerkship came early. ”It just kind of came to me my first year,” he said. “It was probably inspired by Chris May’s class. I fell in love with Civil Procedure immediately; we did a lot of Supreme Court cases.”

Loyola business law professor Susan Liebler encouraged Ides, helping him outline a strategy that included landing a clerkship with an important federal appellate judge. The Hon. Clement Haynesworth, U.S. Court of Appeals for the Fourth Circuit, had supplied clerks to the Supreme Court in each of the four years preceding Ides’ tenure. Once there, Ides did not waste the opportunity.

“He had a backload of cases, so I decided I would get through them,” Ides said. “He had a heater covered with the files of uncompleted cases, and I cleared the heater. The secretaries told me that they couldn’t recall when the heater was cleared. I think that may have been a factor in securing the Supreme Court clerkshp. He told Associate Justice Byron White about that, and I got the clerkship with White.”

Ides later successfully recommended one of his students for a Supreme Court clerkship. The applicant was David W. Burcham ’84, who went on to become a longtime professor and dean at Loyola, and later president of Loyola Marymount University.