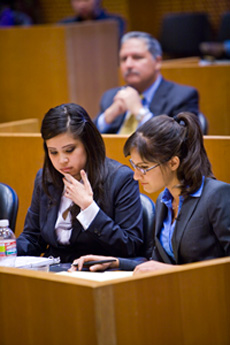 Loyola’s teams have garnered great success in these tournaments.

The Byrne Trial Advocacy Team is a nationally ranked competitive mock trial team where talented second-, third- and fourth-year students have the rare opportunity to receive extensive, individualized training in all aspects of trial advocacy. Students earn six units for the first year on the team and four units for subsequent years. Each year, team members are selected based on an intramural competition held at the end of the spring semester.

Team members represent the school in a series of regional and national mock trial competitions including the National Trial Competition, the AAJ Student Trial Competition and the NITA Tournament of Champions.

Loyola’s teams have garnered great success in these tournaments, winning 25 out of the last 30 regional tournaments and eleven national championships. The tournaments involve both civil and criminal cases; students are trained to conduct all aspects of a jury trial including opening statement, direct examination, cross examination and closing argument, as well as evidentiary arguments to a judge.

"For months, my team would work on theories, themes and evidence arguments before we faced other law schools in competitions around the country... I can honestly say that my experience helped me in interviews."

Being a member of the Byrne Trial Team was a transformative experience that has served me well in my career. I had mock trial experience from my high school and undergraduate university teams, but Byrne pushed my abilities to the next level and taught me the value of being authentic to connect with jurors. Byrne has helped me understand complicated legal issues and subject matters in order to break them down and explain them to jurors, or even to the judge. Byrne forces you to look at both sides of a case, which is helpful every day to evaluate the strength of your arguments and anticipate opposing counsel’s potential arguments. Most of all, Byrne gave me confidence around judges and fellow attorneys, which in turn has given my supervising attorneys more confidence in me, especially when sending me into the courtroom or in making presentations.

Byrne gave me the foundation to become the trial lawyer I am today.  The fundamental skills taught and honed during my two years on Byrne allowed me to prosper in court against far more experienced lawyers.  In the first decade after graduation, I hit record setting verdicts and was nominated as Trial Lawyer of the Year for CAALA.  Over the following decade, I have obtained over 50 seven figure results.  None of this would be possible without the invaluable skill sets I obtained through Byrne.