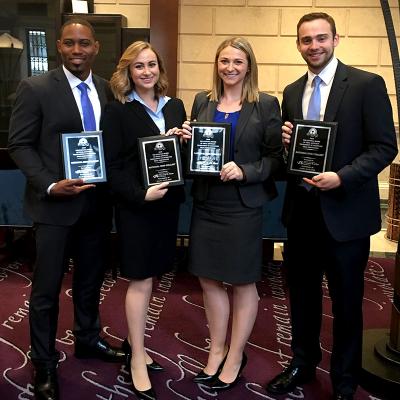 Members of Loyola's Byrne Trial Advocacy Team were named National Semifinalists at the 2018 National Board of Trial Advocates' Tournament of Champions, a competition they won in 2015.

Loyola leads the field in advocacy with teams named champions of more than 100 competitions and consistently ranks in the top 10 among trial and advocacy programs by U.S. News & World Report. Our teams regularly win regional, national and international awards. Loyola’s programs promote innovative curriculum and a commitment to ethical advocacy by offering a multitude of practical learning opportunities. Loyola places a strong emphasis on skills training to better equip students for a competitive job market after graduation.

Faculty advisers and renowned alumni are on hand to offer guidance and support along the way. More than 200 Loyola alumni currently preside as trial court judges in Southern California -- more than from any other school.

READ MORE ABOUT OUR TEAMS' RECENT VICTORIES AND LEARN ABOUT LOYOLA'S LEGACY OF EXCELLENCE IN TRIAL ADVOCACY AND MOOT COURT PROGRAMS.