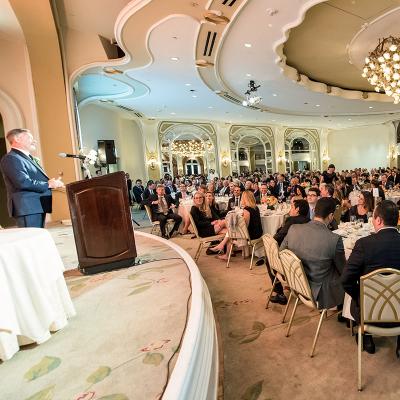 LMU Loyola Law School students will have the chance to mingle with 500 judges and top litigators during the 15th-annual Tribute to the Champions of Justice dinner and award ceremony to be held at 6 p.m. on Thursday, Oct. 24, 2019 at the Beverly Hills Hotel. This year’s honorees are Victor L. George, Law Offices of Victor George, and Thomas E. McAndrews ’84, Law Firm of Reback, McAndrews & Blessey, LLP.

The Civil Justice Program awards annually recognize attorneys who advance the civil justice system through their work both in and out of court. Honorees’ careers are marked by professional excellence, technical proficiency and uncompromising integrity.

“This year’s Champions of Justice exemplify the civil justice system at its very best,” said John Nockleby, Loyola Law School professor and founding director of the Civil Justice Program. “Our honorees have been zealous advocates for their clients while also improving the profession for

Having cultivated a reputation for fairness through his work with myriad trial bar organizations, defense attorney and LLS alumnus McAndrews espouses the ideal that attorneys must be zealous advocates for their clients – but without sacrificing integrity. In other words, representing a client “doesn’t mean you have to be mean-spirited or make your opposing counsel’s life miserable,” said McAndrews, whose practice focuses on defending healthcare personnel and institutions.

Plaintiffs attorney George concentrates on representing people who have suffered catastrophic injuries or been harassed or discriminated against in employment. He thrives on serving the underdog – and does it often. Since opening the Law Offices of Victor George in 1990, he has completed dozens of trials through jury verdict. During one 10-year stretch, he didn’t lose a single case, he said.

LLS students are a mainstay of the signature event, where they help check-in guests and provide other support functions in addition to having the rare opportunity to network with the region’s finest litigators. They also have the chance to catch up with recent alumni who have already found the event indispensable. And perhaps most valuable of all, they get an up-close-and-personal look at the career arcs of some of the most highly respected attorneys around.

The Civil Justice Program was created in 2005 to focus research and public attention on the civil justice system. The Civil Justice Program convenes periodic conferences, seminars and presentations; promotes and publishes scholarly research; and initiates cross-disciplinary projects. Its programs include the annual Journalist Law School, a four-day legal bootcamp for reporters, editors and producers that has educated more than 500 journalists.