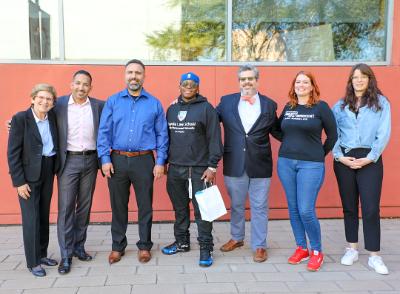 Loyola Project for the Innocent Staff with Exonerees

Loyola Project for the Innocent (LPI) welcomed exonerees, students, faculty and alumni on Monday, Oct. 3 to reflect on International Wrongful Conviction Day and to celebrate LPI’s work to free the wrongfully convicted and bring criminal justice reform. This gathering raised awareness among the LMU Loyola Law School (LLS) community of the many causes of wrongful conviction and sought to recognize the tremendous personal, social, and emotional costs of wrongful conviction for innocent people, their families, and our society.

“There was a time not too long ago when many people didn’t believe that there were a significant number of innocent people in prison,” said LPI Senior Director Adam Grant. “But, as has become very clear over the years, when you see person after person being exonerated, freed, and walked out of prison, that this really is an enormous problem in the American justice system and in many of the other countries around the world.”

Guest speakers included Marco Contreras, who in 2017 was exonerated after serving 20 years of a life-plus-seven years sentence for a wrongful conviction of attempted murder and robbery; Emon Barnes, who was only 15 years old at the time of his arrest for an attempted murder he did not commit and spent 19 years in prison before being released in 2020; and Ruben Pinuelas, who while advocating for himself as an innocent man during 12 years of solitary confinement in Pelican Bay State Prison had his own conviction overturned on grounds of insufficient evidence.

“I was able to join the day Marco was released and just help walk him out of there and I can’t explain it. It was sort of an out-of-body experience trying to understand how Marco must have felt that day getting his freedom after 20 years. And I couldn’t. I couldn’t. I kept trying to explain the feeling to other people and words just failed me,” said fourth-year evening student and former field investigator for LPI Jason Dailey.

This powerful program had an impact on up-and-coming young lawyers as they heard these stories and began to understand the human cost behind wrongful conviction. Part of LPI’s central mission is to prepare the next generation of defense attorneys and prosecutors to create a fairer justice system. Training lawyers to uphold prosecutorial accountability and pursue the truth over convenience is just a small step toward the change that is desperately needed.

“For me, it was like a baby going into a grown man environment,” said Emon Barnes, recalling his feelings upon entering prison as a teenager. “Really, you’re not knowing what’s going to happen, not knowing if you’re going to live or not. So, basically, you have to stay grounded in what you believe in. If you’re rooted in prayer, you stay praying.”

The program was organized by LPI Assistant Legal Director Megan Baca, and LPI Fellow Lena Kerouani, who spoke on the approach for dealing with wrongful convictions around the world.