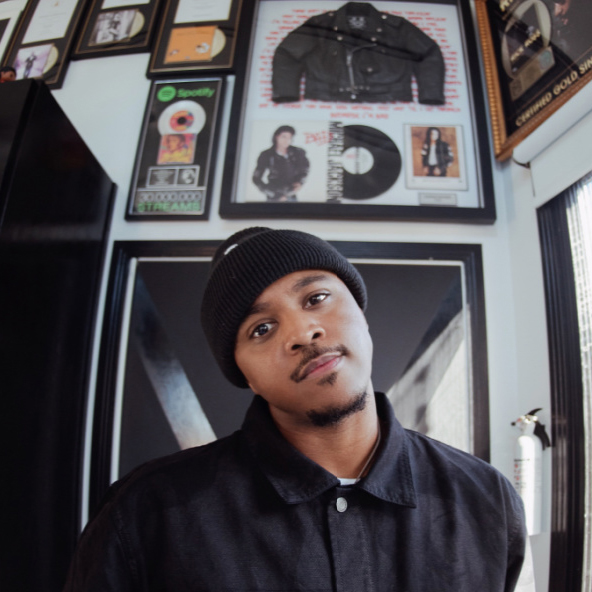 Khris Riddick-Tynes, a Loyola Marymount University Bellarmine College of Liberal Arts graduate, is finishing up his last semester at Loyola Law School in the JD Evening Program. He also serves as vice president of A&R and co-head of urban music at Arista Records. His approach is to empower artists to speak their truths and forge genuine connections with their audiences.

At his core, Riddick-Tynes is a people person who finds joy in lending a helping hand and looking out for others. His interpersonal and communication skills coupled with a deep knowledge and love for music, make him exceptionally well-suited for discovering and developing talent, and guiding artists' subsequent careers.

“Arista’s original roster is known as an urban/pop label that was responsible for the careers of artists such as TLC, Usher, Whitney Houston, Pink, and OutKast,” says Riddick-Tynes. “My goal with the revival is to honor this genre-bending vibe and sensibility by bringing in artists who are not tied down to one type of music and building a culture of trust and creativity.”

At the young age of 30, Riddick-Tynes’ career is already studded with achievements. In 2020, he earned two Grammy nominations. The first for co-writing Rick Ross’ “Gold Roses” featuring Drake, and the second for his collaboration with Jessie Reyez on “Body Count Remix” featuring Normani and Kehlani. He also worked on Toni Braxton and Babyface’s collaborative and Grammy-winning album, “Love, Marriage, & Divorce.” Most recently, in 2022, he received nominations for Ariana Grande’s “Positions,” Drake’s “Certified Lover Boy,” and Eric Bellinger’s “New Light.”

A native Angeleno, Riddick-Tynes comes from a musical family: his grandmother, Maria Tynes, was signed to Capitol Records, and his father, Kenny Tynes, worked with Randy Jackson’s group “Randy & The Gypsys” on their self-titled album. Kenny Tynes also had a home music studio where Riddick-Tynes started learning the equipment from a young age. This caught the attention of his godfather, Grammy award-winning mix engineer Neal Pogue (Tyler the creator, Doja Cat, Outkast), who helped Riddick-Tynes develop his ear and music business acumen.

“Growing up, our home was the place to kick it and do music for a lot of local artists,” says Riddick-Tynes. “Kenny ‘Babyface’ Edmonds became my mentor and I realized that I wanted to pursue music professionally.”

When he graduated St. Bernard High School and chose a college, Riddick-Tynes followed the advice of his mom who told him, “Go to LMU and if music doesn’t work out, you can go to law school.”

It was at LMU that Riddick-Tynes developed a strong social consciousness. He credits Marne Campbell, associate professor and chair of African American Studies, for sparking his interest in empowerment, inclusion, and equality for marginalized groups.

“I want to change the narrative to ensure that all voices are heard and all stories are being told properly, especially in the creative community,” says Riddick-Tynes. “LMU taught me to be a good teacher and communicator so that people can relate to your message, and want to get engaged and support the movement.”

Campbell was also very supportive of Riddick-Tynes using his time at LMU to write, produce, and network. It was during his junior year that he met a young artist named Ariana and they began working together. Riddick-Tynes helped craft her sound and produce her first album. “Yours Truly,” Ariana Grande’s critically acclaimed debut album, came out in 2013 and catapulted Grande and Riddick-Tynes into the mainstream music scene. Since then, Riddick-Tynes has worked with top artists such as Chris Brown, Drake, Ella Mai, Ty Dolla $ign, Wiz Khalifa, Kehlani and others.

Despite his tremendous success in music, Riddick-Tynes decided to follow his mom’s advice and go to law school. LLS was the only school he applied to because it has a great reputation in the music industry and because he is a Lion through and through. Riddick-Tynes was also inspired to study law because Clive Davis, founder and president of Arista Records from 1974-2000, was an attorney.

“Having a legal background is an excellent foundation for any business,” says Riddick-Tynes. “But, in this business, combining legal expertise with creative ideas makes you unstoppable.”

Recently, Riddick-Tynes teamed up with Professor Campbell to create a pathway for LMU students who are serious about music industry careers. They are developing a formalized program for aspiring artists, managers, producers, and executives. Riddick-Tynes envisions giving every student a personalized, hands-on experience and dedicated mentor based on their professional goals.

“Making solid connections and developing a true understanding of music and the music business is so important,” says Riddick-Tynes. “Equally important is a social justice perspective and other factors that greatly contribute to success such as how you carry yourself and interface with others.”

Through the incredible highs and a few career lulls, Riddick Tynes is guided by his personal philosophy: “Find what you are good at and just keep doing it. Don’t get too high, or too low, be in the middle. It’s all about the long-term game.”

In other words, “Find your voice. Find your tempo.”