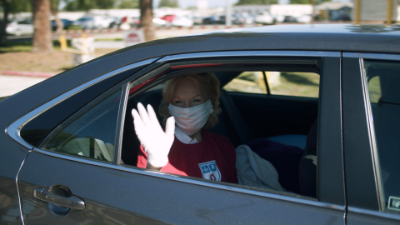 LMU Loyola Law School Project for the Innocent (LPI) client Jane Dorotik was released on her own recognizance while she awaits the resolution of her claim that she is innocent, following an April 20, 2020 order by Judge Harry M. Elias of the San Diego Superior Court because of the danger she faced while confined at the California Institution for Women (CIW) during the spread of COVID-19.

Dorotik, now 73 years old, was convicted of killing her husband, who was found murdered by the roadside in Valley Center in February 2000. She has been fighting to prove her innocence since the time of her arrest. LPI spent three years investigating the case. In August 2019, LPI filed a petition for a writ of habeas corpus on behalf Dorotik alleging she was convicted, among other reasons, because the prosecution presented false blood and DNA evidence to the jury.

In October 2019, Judge Elias issued an order to show cause as to all eight of Dorotik’s claims. Since then, DNA testing has excluded her from evidence found at the crime scene. Just as Dorotik’s legal team was gearing up for an evidentiary hearing, the spread of COVID-19 prompted the presiding judge of the San Diego Superior Court to issue a general order closing the courts to all but a few “emergency matters,” so that no habeas corpus proceedings could be brought.

On April 10, 2020, after being turned away at the courthouse doors and denied an opportunity to file any pleadings in the case, LPI filed a petition for a writ of mandate in the Court of Appeal, asserting that the San Diego Superior Court’s general order unconstitutionally suspended the writ of habeas corpus and prevented Dorotik and other petitioners similarly situated from challenging the legality of their detention in court. The general order has now been amended such that habeas proceedings are no longer banned from being heard during the pandemic.

“We filed an emergency application for release of Ms. Dorotik pending the outcome of her post-conviction proceedings,” said Professor Laurie Levenson, “because her advanced age and the conditions inside the prison, where inmates are unable to maintain social distancing, left her at extreme risk of contracting the virus.”

At a telephonic hearing held on April 20, Judge Elias considered arguments by LPI and the San Diego District Attorney’s office about the need for Dorotik to be released. The court granted LPI’s request and ordered her to be released immediately on her own recognizance.

“We are so relieved and grateful to Judge Elias for granting our request and ordering the release of our client,” said Paula Mitchell, LPI’s legal director. “Given the ample evidence we have presented to the court showing that Ms. Dorotik is innocent, we have every reason to believe the court will ultimately conclude that she did not receive a fair trial and that she was convicted because the jury relied on significant forensic evidence that was demonstrably false.”

“We argued to the court that it would truly be a tragic outcome if, just as she’s about to prove her innocence, Jane were to contract the deadly coronavirus while in prison waiting for her hearing to take place, and then die before she is able to exonerate herself,” said Paige McGrail, third-year LPI clinic student who has worked on the case for the last two years.

“Other judges should follow Judge Elias’s lead and order the release of individuals who are in the midst of post-conviction proceedings and are trapped in prison, waiting for their claims to be heard,” said Adam Grant, LPI’s program director. “If a petitioner like Jane can be safely released and taken out of harm’s way while they’re waiting for the chance to prove their innocence in court, judges need to be creative about finding ways to make that happen.”

“When I advised Jane’s sister that Jane was going to be released soon, her sister immediately burst into tears. She could not stop crying,” said LPI staff attorney Megan Baca. “Jane’s sister has worked tirelessly over the last two decades to prove Jane’s innocence. The tears of relief were long in coming.”

“I think the DNA evidence that excluded Jane as a contributor may have helped persuade the court that she will likely prevail on her petition, once the court is able to hold a hearing,” said DNA staff attorney Nikki Herst-Cook. “Despite numerous items of evidence being submitted for DNA testing, there is simply no evidence tying Jane to this crime.”

“We believe this is one of those cases where a defendant was convicted because investigators immediately but wrongly assumed she was guilty and then proceeded to ignore leads that pointed to other suspects,” said Hilary Morman, who helped write Dorotik’s original petition. “Now, Jane will be able to set the record straight.” Learn more at www.lls.edu/lpi.