Loyola Project for the Innocent Secures Third Release of 2017 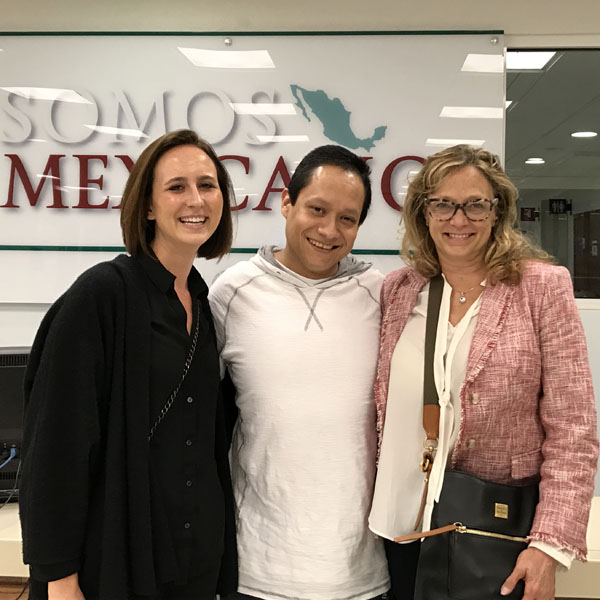 Loyola Project for the Innocent faculty and students with Jaime Ponce's family on April 11, 2017.

Loyola Law School, Los Angeles Project for the Innocent (LPI) client Jaime Ponce has been ordered released from prison today after serving 19 years of a 47-years-to-life sentence. Los Angeles Superior Court Judge Steven Blades granted Ponce's petition for a writ of habeas corpus in part and ordered Ponce's release after LPI investigated the case and presented its findings to the court. This is the third release for Loyola’s Project for the Innocent in the last month.

“Jaime Ponce was just 19 years old and had no criminal record when he was convicted of a shooting he had nothing to do with – and one in which no one was injured,” said Paula Mitchell, LPI’s legal director. Mitchell says Ponce has maintained his innocence since the time he was arrested.

After losing his appeal, Ponce began studying the law and worked diligently to learn what legal channels he needed to pursue to prove his innocence. Finally, in 2015, the Court of Appeal agreed that Ponce may not have been adequately represented at trial and asked the trial court to hold a hearing to determine if the conviction should stand. At that point, Loyola’s Project for the Innocent took Ponce’s case.

“I am proud that our team did such a great job investigating this case and proud that Jaime is now free,” said Prof. Laurie Levenson, LPI’s founder.

The crime occurred in Sylmar on the evening of July 27, 1998. Ponce and a friend had gone to a party at a house in Sylmar earlier that afternoon, but Ponce was so tired from having worked the 3 p.m. to 6 a.m. shift the previous night that he went to another room and fell asleep while the party was happening. Ponce was awakened around 9 p.m. by LAPD officers, who were investigating a drive-by shooting that had occurred earlier that night in the same neighborhood.

According to police reports, the intended victim of the shooting, a juvenile, told police he saw a red Ford Bronco drive up and he heard the passenger tell the driver “shoot him, shoot him.” The driver fired twice, but missed both times. The passenger, also a juvenile, was immediately identified as the person hosting the party near where the shooting occurred.  Police arrived at the party and the passenger was immediately arrested.  Ponce and others attending the party were lined up and presented as possible suspects in both a field line-up and later in a photo line-up, but the intended victim was unable to identify the driver of the vehicle.

The prosecution argued that Ponce committed the crime because he was a gang member, but LPI’s investigation uncovered no evidence supporting that theory.  Instead, LPI’s investigation revealed that at the time he was arrested, Ponce was working two jobs, living at home with his parents, and helping support his family financially.

“Jaime was a hard worker who was well-liked by his bosses. He was a good kid with no criminal record when this happened,” said Mitchell.

LPI’s Program Director Adam Grant added, “The problem in this case was not the evidence against Jaime, because there really wasn’t any. The problem was that Jaime’s defense lawyer failed to do her job by investigating the case. Jaime’s lawyer met him for the first time the day his trial started, never asked him to tell her what happened, didn’t read the police reports, and never interviewed a single eyewitness to the crime. At Jaime’s trial, his lawyer essentially put on no defense at all. Instead, she told the jury during her opening argument that Jaime was the driver and the shooter. She basically left the jury no choice but to convict Jaime,” Grant said.

While in prison, Ponce, 38, worked hard at developing his artistic talents. He plans to enroll in art school when he is released