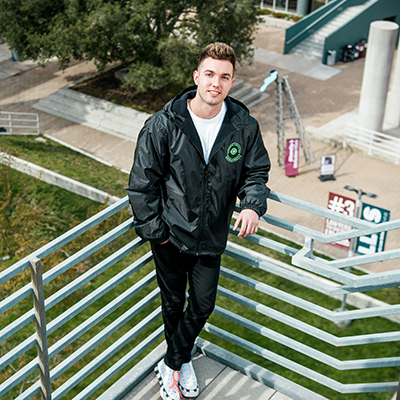 Humphrey knew the company’s legal concerns well. By that time, he had worked on those issues as an extern and then as a lawyer, beginning during his first year at Loyola. He was taken back, however, when the general counsel left and the CEO asked him to take over.

“I was two years out of law school. I had a few months of panic,” Humphrey says.

How he came to be in such a high-powered post in entertainment law was almost like a fairy tale.

Born and raised in New Jersey, Humphrey went to college in Washington, D.C., hoping to become a sports agent. He managed to find student jobs with all the district’s major teams — the Washington Redskins, Nationals and Wizards, as well as with an agency.

But he grew disillusioned with life as an agent and focused instead on entertainment law. He came to Loyola for its unique Entertainment & Media Law Concentration and its location near the heart of the entertainment capital of the world.

In the middle of Humphrey’s first year, he attended a well-known electronic dance music festival called Beyond Wonderland.

“I was kind of blown away by it,” he says — so blown away that the following Monday he tracked down the production company, Insomniac, and offered his services to its legal department.

They pointed him to their outside counsel, who gave him several projects. “I told him I’d be happy to do any sort of research or anything he needs,” Humphrey says.

Eventually, the arrangement blossomed into a Loyola-sanctioned externship. By the time Humphrey graduated in 2013, the outside counsel had become Insomniac’s general counsel, Live Nation had purchased a 50-percent interest in the production company, and the once little company suddenly had over 100 employees and was growing.

“It was very clear they needed help,” he says. “They were able to create a position for me.”

Not long after, the general counsel departed, leaving Humphrey to take over as Insomniac’s only in-house attorney.

He found that his experience with the inner-workings of the organization from his time as an extern and junior lawyer helped the transition — as did his classes from Professor Jay Dougherty, the director of Loyola’s Entertainment & Media Law Institute, among others. “I am able to use what I learned at Loyola on an ongoing basis, especially the Entertainment Law, Copyright Law, and Trademark Law courses I took there,” he says.

Humphrey appreciates the opportunities found at Loyola and is deliberate about giving back and helping other aspiring entertainment attorneys.  He supports the trajectory of the school as a Juris Fund donor and will serve as a mentor to a 1L this fall as a part of Loyola’s Entertainment Law Fellows program.  He now has another recent Loyola graduate working with him as an associate. And every semester, he brings in a law-student extern.

He has discovered that the externs he hires from Loyola Law School are the best.

“Loyola seems to always produce very practical people who are ready to enter the real world and be attorneys,” he says. “They have a very good balance of intelligence along with interpersonal and communication skills, which are especially important in the entertainment industry.”

These days, Loyola students have access to a wide variety of classes on entertainment and sports law that offer hands-on skills training. The school’s externship program, overseen by Director of Private Field Placements Grace Parrish, regularly places students with alumni in entertainment companies and law firms, he says.

And the work at Insomniac encompasses a broad spectrum of entertainment and business legal issues. In addition to Insomniac’s 12 to 15 festivals every year, Humphrey oversees legal issues for the expanding company’s international productions, its record label and its talent-booking arm. Recently, he coordinated a merger-and-acquisition deal in Amsterdam.

“It seems like there’s something new every day, which is amazing,” he says. “The possibilities are beyond what I ever anticipated.”

The work we do matters. Find out more or apply today.