In Securing Freedom for Clients, Student Finds Passion for Justice 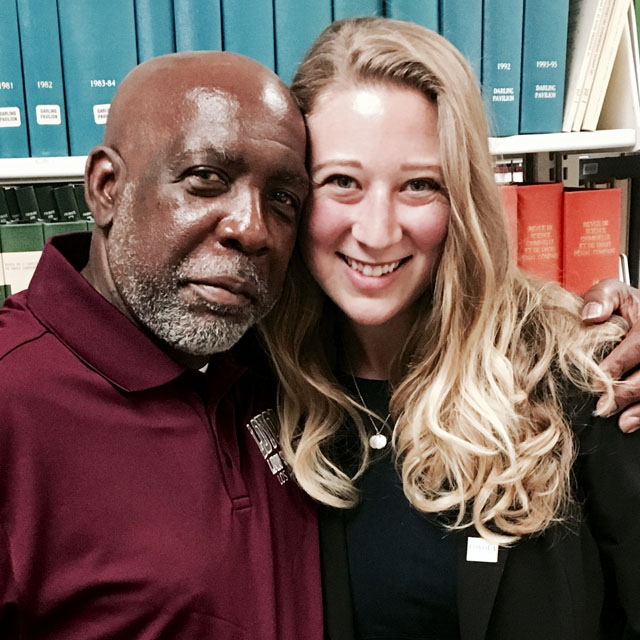 Most post-conviction attorneys can only dream of witnessing the freedom of four wrongfully convicted clients during their careers. Loyola Project for the Innocent (LPI) Summer Fellow Hannah Brown ’18 saw it all in one semester.

Brown is part of a group of attorneys and students who worked on the cases of four clients released in the spring 2017 semester after collectively serving more than a half-century in prison on faulty convictions. The four men were among a total of six clients for whom the LPI has successfully secured release since its founding in 2011.

As the supervisor of a team of interns reviewing cases, Brown has often drawn on her unique experience in her role as summer fellow. Additionally, she has shared her stories with counterparts from similar legal clinics across the country in a series of summer conferences.

“I have learned a lot about wrongful conviction policy this summer and how offices like the LPI can achieve their goals through both litigation and working with legislators to affect policy change,” Brown says.

During her tenure with the LPI, Brown has sharpened a range of legal skills: case intake, claim research, drafting and interviewing witnesses – to name a few. She has found all of it to be invaluable.

“The investigations are incredibly interesting. We speak with people involved in murder cases from decades ago,” Brown says.

“Additionally, the opportunity to meet and speak with clients is fascinating. These are innocent people who have been incarcerated for decades. Each client is so different and has such a different perspective on life.”

Brown’s most memorable summer experience has been a road trip with Andrew Leander Wilson, who served 32 years in prison for a wrongful conviction.

“I drove with Andrew and LPI Legal Investigator Jason Dailey for two days to help deliver a donated car back to Andrew’s hometown of St. Louis,” Brown says of the self-described “LPI Justice Road Trip” for which she eagerly volunteered. “It was a long drive. But being out on the open road with a newly released client truly made me appreciate the importance of the clinic’s work.”

As a senior leader of the clinic, Brown will return to the LPI in fall 2017 as a research assistant, helping guide a new crop of student advocates. Entering her final year of law school, Brown is grateful to the LPI for helping her find her passion.

“I now know that I want to do post-conviction work after I graduate,” Brown says. “I would not have even started on that path had the LPI clinic not been available to me as a second-year student.”

Want to make a difference? Learn more about the application process or register for a campus tour.