Distinguished Alumna Reflects on Pioneering Career & Women and the Law 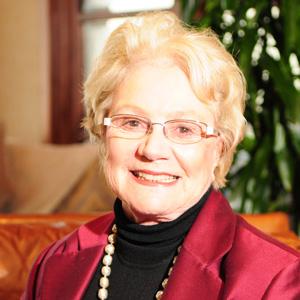 Patricia “Pat” Phillips was one of eight women in a class of 99 students who graduated from LMU Loyola Law School in 1967. “The legal world when I started was almost bereft of women who were lawyers,” she said.

After she graduated, she initially struggled to find work as a lawyer: “The only firm that interviewed me was the firm where my father was a client.” Sixteen years later, Phillips became the first woman president of the Los Angeles County Bar Association, one of the largest regional bar organizations in the nation. She went on to become the first woman president of the Chancery Club, an invitation-only organization for the Los Angeles-area legal profession.

Phillips credits her success to good fortune and to the many colleagues who encouraged her. “I’m very lucky to have had the support of many, many people. At the time, most of them men, of course, because that’s who was there,” she said.

She also has been lucky, she said, to have had support from Loyola Law School from the very beginning. Then-Associate Dean Lloyd Tevis worked out an arrangement allowing her to transfer from a San Francisco school during her first year.

LLS’s Evening Program enabled Phillips to build and support her family while preparing to become an attorney. She was pregnant with her third child when she started at the law school and gave birth to him and another, a daughter, while still in school. She welcomed her fifth and final child home while awaiting bar results in 1967. While Phillips is rightfully proud of all that she accomplished professionally, her husband, John, and children, Toni, Lisa, Paul, Samantha, and John, continue to be sources of support and inspiration.

While a student and since, she also found support from classmates. “I have the most wonderful friends, my very dearest friends, from law school,” she said. To this day, she and her friends, Janet Chubb ’67, Patricia Lobello ’67, Lola McAlpin-Grant ’66, Paula Tipton ’67, and Megan Wagner ’66, who refer to themselves as The Dirty Half Dozen, remain close.

It was a fellow female Loyola Law School graduate who pointed Phillips toward her first job as a clerk to a Los Angeles Superior Court judge. The next year, that judge and several of his colleagues recommended her to a boutique litigation firm, then known as Beardsley, Hufstedler & Kemble. Her practice there came to focus on family law as the firm grew and ultimately merged with Morrison & Foerster LLP.

Her partners urged her to become involved in the Los Angeles County Bar Association. She started with committee work, then joined the board, moved up the ranks and became its first woman president in 1984.

Being the first anything is challenging, and while she felt some resistance to her becoming bar president, it didn’t bother her. Colleagues and clients saw the naturally upbeat and gregarious Phillips as a genuinely nice person, but also one who was “a bulldog in the courtroom,” she said.

That unique mix of charisma and skill made Phillips a formidable and sought-after attorney. Her clients included senators, business leaders, and international corporations.  But looking back on her career, Phillips fondly remembers the many families she worked with and helped through some of the most challenging moments of their lives. She is particularly proud to have helped and advocated for the rights of LGBTQ parents who, at the time Phillips represented them, did not have the federal or state protections they do now. Phillips facilitated the first same-sex couple adoption in Los Angeles County and was tapped by the ACLU to help a trans woman retain custody of her daughter in Orange County.

“I knew what I could do. I knew I was a good lawyer.  I had a home, I had a husband, I had five kids, I had a great practice as a lawyer,” she said. Phillips later served on the State Bar Board of Governors and the state Judicial Council.

“I know that it’s extremely difficult for young women to make their way in the law, even today. But very frankly, at the time I was doing it, I was such a novelty; I was not a threat to anybody,” she said. “I was very, very lucky to have all these guys who really wanted me to succeed.”

Phillips now works primarily as a mediator with her family law firm, Phillips Jessner LLP. She joined the Loyola Law School Board of Directors in 2002 and established the Women and the Law Scholarship in 2015 to support the next generation of leaders at LLS. After addressing the Loyola Law School community during “Women Trailblazers” as part of the Dean’s Distinguished Speakers Series, she made a special gift to the Women and the Law Scholarship in honor of LLS’s Centennial and in support of the $1,000,000 Centennial Scholarship Initiative.

Reflecting on her distinguished career, Philips advised women today who might want to emulate her success to focus on what they want. “You’ve got to choose what’s important to you and then just concentrate on those things,” she said. “Our challenge as women is to continue to fight the good fight, to be out there and be advancing women’s rights.”