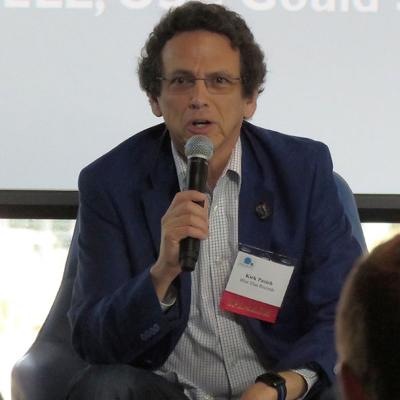 LMU Loyola Law School and LMU School of Film and Television are partnering with the Los Angeles Intellectual Property Law Association (LAIPLA) to host “TechTainment 5.0: Technology + Entertainment” on Thursday, Oct. 3, from 9:30 a.m.-5 p.m. at LMU SFTV’s Playa Vista Campus. The symposium will engage scholars, lawyers, innovators and students in solving the legal and business issues raised by augmented reality, the expansion of electronic sports, the proliferation of identity-masking and more.

Experts from across the university play critical roles in the annual dialogue, and this year is no exception. Following LMU SFTV Dean Peggy Rajski’s opening remarks, university professors and fellows will anchor a string of panels. Examining the impact of screen time on our everyday lives, Electronics Overload will open the substantive portion of the conference with such panelists as Joseph Hellige, LMU professor of psychology. He will be joined by LMU SFTV’s Mikki Kressbach.

Later in the day, LLS Professor Rebecca Delfino, author of scholarship addressing the problem of “deep fakes,” will offer her views during Dealing with the Faux. The panel will be moderated by Professor Justin Hughes, William Matthew Byrne, Jr. Chair at LLS. And Adjunct Professor Tracey Freed ’05 will helm Rebooting the Studio, which will focus on the technologies most apt to disrupt Hollywood.

Members of the LMU community have been a crucial piece of TechTainment since its launch. Other past speakers have included Dean Michael Waterstone along with Professors Jeffery Atik and Karl Manheim. Last year, the panel Is Classic Media Adapting to the New Media Universe? featured LLS alumni Kirk Pasich ’80 (pictured), co-founder, Blue Élan Records; and Marty Willhite ’97, vice chairman, Tulco, LLC.

The university has been a TechTainment partner since the event's 2015 inception. The relationship is a natural fit given the school's emphasis on practical training and prowess in subject areas related to entertainment. LLS was named to Billboard's 2019 list of Top Music Law Schools and has been noted for its entertainment law alumni by Variety's Legal Impact Report. Meanwhile, SFTV was ranked No. 8 in the nation by The Hollywood Reporter and No. 6 nationally among film schools by College Factual.

A must-attend event for content producers, studio executives and those who represent them, the symposium will include a continental breakfast and end with a networking reception. This is the second year the event will be hosted at the LMU Playa Vista Campus, 12105 E. Waterfront Drive in Playa Vista. The daylong event will include several networking breaks for source development and idea exchange. Early bird pricing and industry discounts are available; members of the LLS and SFTV communities are eligible for free admission. Learn more and register at https://www.laipla.net/techtainment-5-0/.