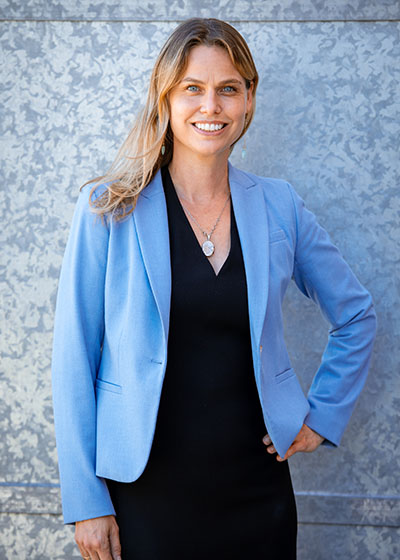 Throughout her extensive career advocating on behalf of victims, new LMU Loyola Law School Professor Stephanie Richard has always believed creative lawyering is the best way to meet client’s goals and challenge systems that fail survivors of crime.   That has been especially true during the pandemic, when obeying a traditional stay-at-home order has had the potential to put her clients at risk.

“Before COVID-19, victims already faced extreme barriers to safety, health services, and employment; now, they are vulnerable to even greater unrelenting abuse. Survivors are not safer at home and need access to resources now.” Richard wrote in a Capitol Weekly op-ed. As first responders, we are working around the clock to meet growing demands from the survivors we serve.”

That brand of advocacy is not uncommon for Richard, who recently joined LLS to lead its new Rights in Systems Enforced (RISE) clinic after a distinguished career at the Coalition to Abolish Slavery & Trafficking, where she served in a variety of roles that included senior policy advisor, policy & legal services director and managing attorney. In her previous role. Richard oversaw the development of the legal services program and the national training and assistance program for trafficking survivors.

Richard also conducted extensive policy work in Washington, DC, Sacramento and Los Angeles to ensure the on the ground experience of survivors and service providers were central to state and federal legislative efforts, regulations and impact litigation focusing on the intersectional issues trafficking survivors face. For trafficking to be prevented Richard focused on the substantive changes needed in immigration and criminal justice reform, child welfare and business regulation issues. Additionally, she was the author of countless law review articles and other op-eds addressing trafficking and related issues.

“I feel so fortunate to join LLS’ clinical program, where my focus can be on training new lawyers to be incredible advocates for their clients while engaging in systematic change efforts to prevent others from being vulnerable,” said Richard. “I was drawn to LLS’ long-standing social justice and racial equity mission and proud to join a team of such distinguished colleagues in this area.

Along the way, Richard has notched a number of firsts: She orchestrated the largest legal services program in the country to serve trafficking survivors; she launched the first national technical assistance/training program for lawyers and social service providers; and she initiated the first national survivor lead policy advocacy program resulting in passage of legislation creating the first survivor advisory council to the U.S. government. In between all of that, she has spoken or testified as an expert before countless legislative bodies, panels and tribunals.

Richard’s vast experience addressing issues related to human trafficking will help inform her new role at LLS, which will include overseeing the Sunita Jain Anti-Trafficking Policy Initiative designed to advance anti-trafficking and survivor rights policy reforms and engage law students to have a broader impact. The initiative, established by benefactor John Jain, M.D.in honor of his late sister, is a collaboration of the Loyola Social Justice Clinic and LLS Anti-Racism Center (LARC) and led by Richard and two other experts in their fields: Kathleen Kim, associate dean for equity and inclusion and professor of law; and Elizabeth Bluestein, executive director of Loyola Social Justice Law Clinic and associate clinical professor of law.

Part of the LLS Anti-Racism Center (LARC), RISE engages LLS students in the direct representation of survivors of violent crime who seek to assert their rights in state and/or federal criminal and immigration enforcement systems, and require legal assistance with collateral civil matters. The RISE Clinic approaches survivor representation through an intersectional lens of race and gender justice, which calls for culturally competent and trauma-informed legal counseling to center the interests of its clients.

Through this work, the Loyola RISE Clinic joins a progressive anti-violence movement focused on survivor empowerment against individual and state perpetrated violence. By foregrounding survivor voices, whose victimization may be complicated by their own criminality due to race and gender-based subordination, the LLS RISE Clinic opposes punitive legal regimes and seeks system transformation through survivor rights representation.

“For too long, survivor voices have not be included in criminal justice reform efforts and a caracal approach to justice has been the only approach considered for crime victims,” said Richard. “My hope is that RISE can join the cutting edge transformative and reformative justice movements gaining momentum in Los Angeles and across the United States so that survivors can seek justice with the help of lawyers on their terms and not those dictated by our failing criminal justice system.”