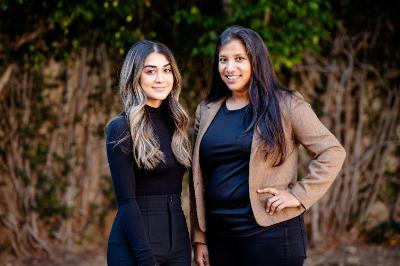 For Christineh Gasparyan ’23, timing was everything. Just as she was seeking opportunities to advocate on behalf of survivors of crime, the law school launched the Rights in Systems Enforced (RISE) Clinic. Participating in RISE’s inaugural class, she not only provided crucial legal support for a survivor of labor trafficking during the federal prosecution of her trafficker; Gasparyan was also able to secure $20,000 in compensation for her client through the California Victim Compensation Board.

RISE Clinic students like Gasparyan, and Viveka Ray-Mazumder ’23, engage in legal representation through a critical race and gender lens based in trauma-informed advocacy. Therefore, in addition to supporting their clients in court, RISE students help each client navigate the broader effects of a labyrinthine prosecutorial system that might otherwise overwhelm or re-traumatize them. They support their clients through any engagement with law enforcement; they protect a client’s rights during evidence collection and testimony preparation; and they counsel clients through the collateral consequences of having been trafficked. It is an intensive experiential learning opportunity for students, who, under the supervision of RISE Director Stephanie Richard, handle real-life cases from start to finish.

Gasparyan’s client, who we’ll call Monica to protect her anonymity, had previously applied and received approval for a T-visa with support from the Loyola Immigrant Justice Clinic. In representing her, Gasparyan brought together her passion for working with both immigrants and violence survivors. With fellow student Layla Forghani ‘23 and in collaboration with RISE social worker Paloma Bustos, Gasparyan completed a California Victim Compensation Board application that enables victims of human trafficking to receive compensation for lost income incurred as the result of deprivation of liberty during the crime.

The team met with Monica to record Monica’s declaration and confirm essential information regarding the application. “It was imperative to make sure the client was aware of the process,” recalls Gasparyan. They went through the application page by page and provided translated documents in Spanish as well. Six months of hard work paid off when Monica was approved for $20,000 in lost wages – the maximum amount allowed.

Gasparyan reports that her passion for this work, including working with clients who, like herself, had navigated the immigration process, “is something that is fundamental to my life and my character.”  Initially interested in entertainment law, Gasparyan reports that her experience with the clinic has caused her to consider shifting gears to pursue immigration work.

Another RISE student, Viveka Ray-Mazumder ’23, who had been organizing youth in Chicago for more than 10 years before joining Loyola Law School, joined RISE because they were looking to build a more critical perspective on the criminal legal system and transformative justice. Ray-Mazumder represented Nancy (also not her real name) in asserting her rights as a survivor and advocated for a thorough and transparent police investigation into the death of her daughter. With the support of RISE staff including their clinic partner Makalie Johnson '23 and volunteer translators, Ray-Mazumder met with law enforcement and received regular status updates about the investigation, obtained a copy of the official medical examiner’s report and translated it into Spanish, recovered Nancy’s daughter’s belongings from law enforcement, spoke with media and other community members to determine whether they had any additional information into the case, and provided social-service referrals to mental health and housing resources.

Ray-Mazumder always kept in mind how to be “a strong advocate while making sure we're being survivor-centered in the process.” They are confident that working on this case has helped illuminate the gap in culturally and linguistically relevant services at the medical examiner’s office and the police department.

Working on Nancy’s case hit close to home for Ray-Mazumder. They drew parallels between Nancy’s access to the medical examiner’s report and their own personal experience witnessing their sick grandfather’s mistreatment at a hospital and the obstacles he faced to have access to information because English is a second language to him. Ray-Mazumder fought tirelessly to bring down any access barriers because “it feels really important to me to do this institutional change.”

In RISE’s last meeting with law enforcement, officers confirmed that Ray-Mazumder's advocacy and Nancy's commitment to her daughter's case led them to conduct a more thorough investigation. RISE is striving to make long-term changes in the justice system for crime survivors.