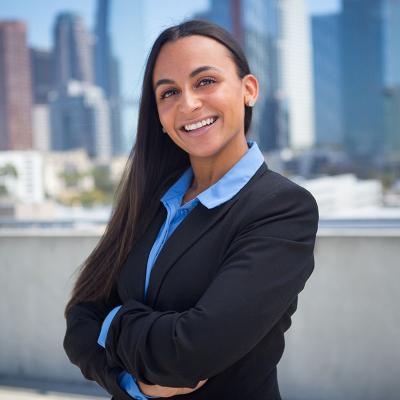 When Paige Samblanet '20 was growing up in a rural part of Ohio, in a cabin surrounded by forest, an empty lot next door, where she used to play, was developed seemingly overnight. Soon, stormwater with trash ran nearby and flooded her family’s land. The earth itself, it seemed, started to rebel. “There were all these effects,” she says, “that nobody had taken into account.” An environmentalist was born.

After graduating from college in upstate New York, Samblanet signed on with an environmental engineering company dedicated to clean water standards. “I loved the work I did,” she recalls. “But I wanted to have more influence, and help create the regulatory framework. I realized I wanted to go to law school.”

She was attracted to Loyola Law School, Los Angeles, where she is now a second-year student, partly for its faculty, and also for the place’s warmth and informality. She’s gotten individual attention from her professors, who she says, “care about the growth of your career as well as your general well-being.” She’s especially fond of Professor Gary Craig, who’s helped orient her to the culture of the law and how to get along in professional settings.

Besides the classes dedicated to environmental issues, Samblanet has been impressed by the school’s connections to the larger environmental movement: She’s recently returned from the Global Climate Action Summit in San Francisco, which hosted Jane Goodall, Gov. Jerry Brown and Al Gore.

The challenges in California are very serious too, as smog, wildfires, flooding and water shortages persist. “Lawyers are going to have to be involved in mitigating damages and making sure forests are managed properly.”

Samblanet is dedicated to learning as much as she can for now, and hopes to work at a law firm when she graduates to gain some general experience, and perhaps to be part of a legal team that deals with renewable energy technology. “My end goal is to work for the Environmental Protection Agency or the environmental division of the UN,” she says. “That’s how I can have the biggest impact.”

The work we do at Loyola matters. Learn more or apply now.