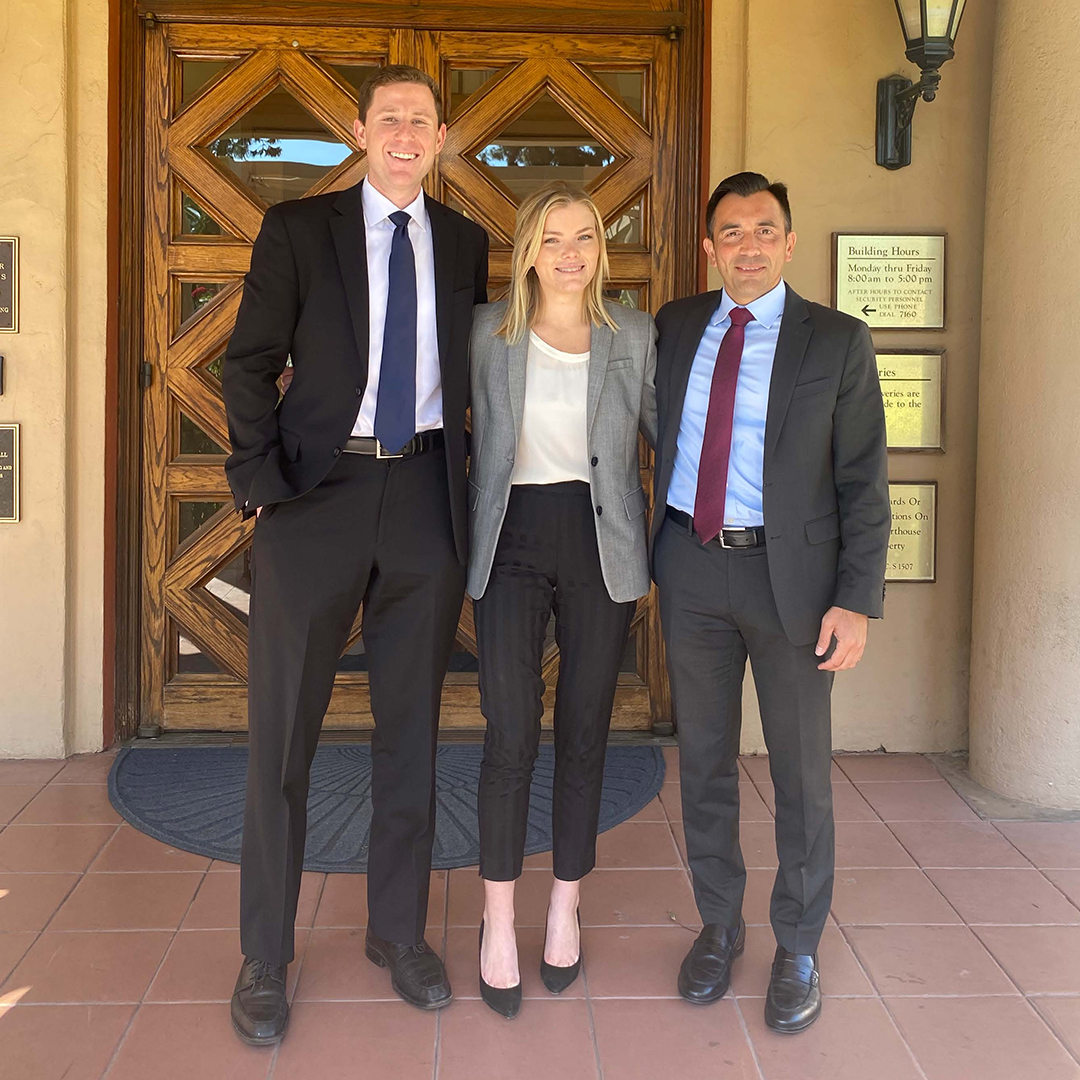 From left: Jake Feiler ’22 and Anne Kitchens ’22, students in the Ninth Circuit Appellate Clinic, won an appeal this spring, representing a Cuban dissident seeking asylum in the United States. They are pictured with Adjunct Professor E. Martin Estrada.

Anne Kitchens ’22 came to LMU Loyola Law School for its many opportunities to learn about public interest law and gain experience working in its public-interest clinics. Jake Feiler ’22 came for the programs and clinics it offers to develop the practical skills lawyers need to succeed in practice. Kitchens and Feiler found all that and more by participating in Loyola Law School’s Ninth Circuit Appellate Clinic, where in May 2022 they won a federal appeal representing a Cuban dissident seeking asylum in the United States.

They are both proud and humbled by what they achieved through the clinic. “It’s crazy that we can do this in law school,” Kitchens said. “We made a powerful, tangible difference.” Feiler echoed that sentiment: “I’m a 26-year-old third-year law student, and suddenly I’m helping lead a case that’s life or death for this man if he’s sent back to Cuba.”

Students in the yearlong program are appointed by the U.S. Court of Appeals for the Ninth Circuit to represent clients who have civil or immigration appeals already pending. Students typically draft and file the client’s opening appellate brief in the fall; then, in the spring semester, they write the reply to the opposition brief and prepare for oral argument. The process culminates with the students arguing their cases before a three-judge panel of the Ninth Circuit prior to the close of the academic year.

“In a nutshell, you’re serving as pro bono counsel for a real client who is appealing to the second highest level of the federal court system,” Feiler said. “And when we say you’re pro bono counsel, you’re basically doing everything from start to finish for your client’s appeal.”

Working in teams of two, clinic students accomplish all that under the close guidance of skilled appellate attorneys. Kitchens and Feiler worked with E. Martin Estrada, a litigation partner at prominent Los Angeles law firm Munger, Tolles & Olson LLP, who has argued a dozen Ninth Circuit appeals himself. They met with Estrada every week at his law firm to study the case, create a plan, decide upon their arguments, edit drafts of briefs and practice for the oral argument. [Listen to the students' oral arguments.]

Estrada helped Kitchens and Feiler edit and rewrite the briefs they filed in the case. Later in the spring he and a few of his law firm associates assisted them by practicing for the oral argument. Feiler said they “over-practiced” for the argument at the court. “We practiced every single question we were going to hear. When we got up there, we weren’t shocked by anything the judges asked,” he said.

The clinic setting allowed the student partners to focus intently on their client’s case, according to Kitchens. “We were able to give it the attention and the care that it deserved,” she said. “I feel like we ended up being really effective advocates.”

And indeed, they won. In an unpublished opinion, the Ninth Circuit overruled a decision from the Board of Immigration Appeals and remanded their client’s asylum case for the board to reconsider. “Our client is very happy that he gets to stay in the United States a little bit longer to argue his case again,” Feiler said.

Paula Mitchell ‘02, the Judy and Steve Page Executive Director of the Loyola Project for the Innocent, runs the clinic with assistance from Clinical Professor Rebecca Delfino. This fall, Mitchell will co-teach with incoming Professor Geoff Kehlmann '14.

Both students had prior advocacy experience before joining the clinic. Feiler has participated on moot court teams, and Kitchens has been an advocate with the Juvenile Innocence & Fair Sentencing Clinic – which, like the Ninth Circuit Appellate Clinic, is part of the Loyola Social Justice Law Clinic. Kitchens said that the Ninth Circuit Appellate Clinic has been especially valuable for the opportunity to prepare and argue a federal appeal and to assist a pro bono client. Feiler agreed. “I think it’s one of the most practical experiences you can get,” he said. “It’s truly an honor to do what we got to do.”

Kitchens summed it up: “It’s the coolest, most unique opportunity to be able to argue a federal appeal. It’s just so rare.”