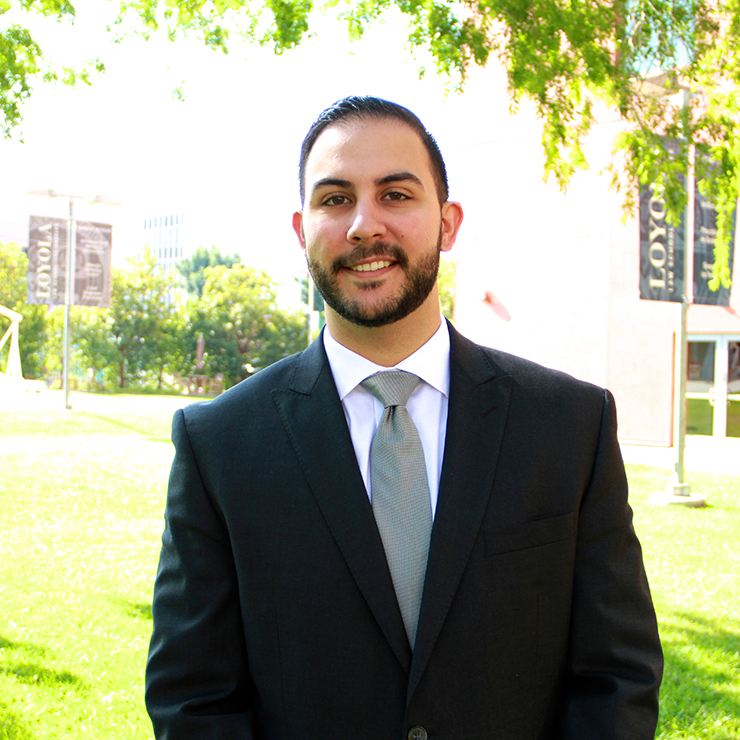 Carefully mapping a pathway to the litigation department of NBC Universal, rising third-year day student Maxwell Shoemaker has mastered the art of the career-advancing transition.

Originally from Escondido, near San Diego, Shoemaker is spending his summer as a litigation intern at entertainment giant NBC Universal, where he deals with issues related to trademark, breach of contract, profit participation, employment and copyright law. While there, he has put his classroom prowess to work, researching complex entertainment-law issues, drafting cease-and-desist letters and other documents.

“I want whatever is going to help me become an effective litigator. I’m keeping my options open, casting a wide net and seeing where it leads,” he said. “I am learning from very experienced litigators that came from the top firms and schools in the country to form one of the best in-house legal teams around.”  But, he admits, there are other perks: “We can see movies before they come out, and we can go on the back lot and look at the facades.”

Shoemaker landed the plumb gig courtesy of his Loyola connections. He credits Professor Sande Buhai, director of Loyola’s Public Interest Law Department, with the hook-up that led to him reconnecting with Christopher Long '15, who was a Copyright classmate.

“That was just straight networking. You talk to as many people as you can and – right place, right time – someone will extend a hand and help you,” he said.  Then he met with Buhai while exploring potential judicial externships, and she re-introduced the pair.

“He suggested I take over for bar studying. And I went to lunch with him and his boss,” said Shoemaker. Next thing he knew, Shoemaker was interviewing with five lawyers from NBC Universal’s General Litigation/Television Litigation department. For scoring this job, “It was really ‘who you know.’”

Deftly negotiating transitions was nothing new to Shoemaker. He decided to transfer to Loyola from another Southern California law school after exploring his options – and what offered him the best pathway to his dream job.

“I knew I was interested in entertainment law, and Loyola is better connected and closer to the industry,” said Shoemaker, who takes public transportation to Loyola every day from his home in Orange County.

Since transferring to Loyola in the fall 2014 semester, Shoemaker has embraced the Loyola culture. “Everyone I met at Loyola has been very studious. It seems like more people mean business. There is clearly a more serious vibe: that people are here to make a career happen. I was very impressed by that.”

Shoemaker has strived to take advantage of every opportunity offered to him. He places particular importance on the ability of transfers to apply to Loyola’s law reviews. Accepted to all three law reviews, he took a position with the Loyola of Los Angeles Law Review. And that made a world of difference.

“Succeeding at the law review write-on gave me opportunities I wouldn’t have had otherwise. When I applied for my judicial externship, I didn’t have an LLS GPA or rank yet. But I could at least say I’m on law review. This was a vote of confidence from the new school I’m in that I’m a good writer. That was a selling point.”

Parlaying his connections and law review status, Shoemaker earned a spot as a judicial extern to the Hon. Otis D. Wright, U.S. District Court, Central District of California. Shoemaker called the externship “the most valuable and rewarding experience I’ve had in law school. Before I went into it, people would say, ‘You’ll learn more from that than any law school class.’ My writing got so much better.”

For life after graduation, Shoemaker is pursuing judicial clerkships and firm positions – specifically in the IP arena. He has already taken advantage of Loyola’s unique Clerkship Committee, which helps students navigate the process. He has enlisted the help of Professor Aimee Dudovitz, twice a former federal clerk: to the Hon. Harry Pregerson, U.S. Court of Appeals for the Ninth Circuit, and to the Hon. Dean D. Pregerson, U.S. District Court, Central District of California.

Ever the pragmatist, Shoemaker points out one other advantage of being a transfer student: “Twice the schools is twice the networking groups and twice the connections.”