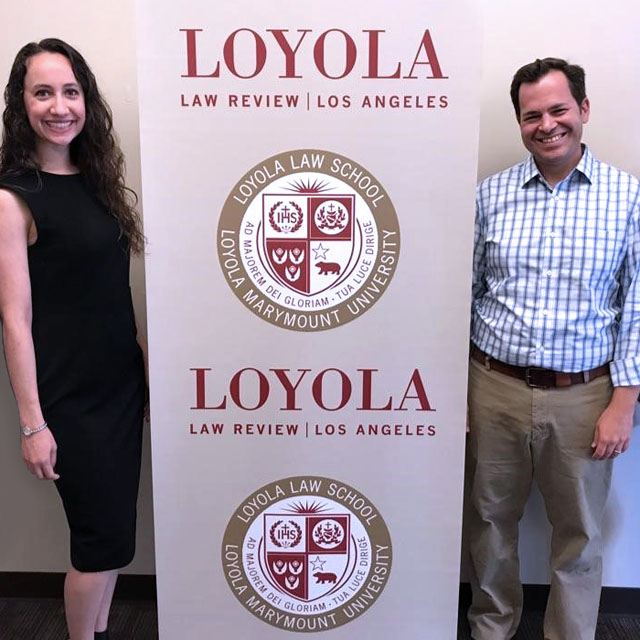 For 50 volumes, the Loyola of Los Angeles Law Review (LLR) has been the go-to place for U.S. presidents, Supreme Court justices, leading scholars and top practitioners to write about the most compelling legal issues of our time: the death penalty, LGBTQ rights, juvenile justice, California governance, commercial speech and much more. Through both its symposia and printed volumes, the LLR has established itself as a leading voice in the national legal dialogue.

Over the course of its half-century publishing legal scholarship, the LLR has often made headlines. “Death penalty costs California $184 million a year, study says” reported the Los Angeles Times in a 2011 headline about the LLR article “Executing the Will of the Voters?: A Roadmap to Mend or End the California Legislature’s Multi-Billion-Dollar Death Penalty Debacle.” The study, co-authored by Loyola Law School Adjunct Professor Paula Mitchell ’02 and the Hon. Arthur L. Alarcón, U.S. Court of Appeals for the Ninth Circuit, received widespread media attention in the lead-up to a ballot initiative seeking to ban the death penalty in California.

LLR contributors have included some of the most prominent legal voices of their times.

"Loyola Law School's flagship law review has been a leading voice in law and legal scholarship since its inception," says Professor Justin Levitt, Associate Dean for Research and former adviser to the LLR. "It's no surprise that a best-in-class law review would feature the work of faculty members from the most preeminent universities and nationally renowned attorneys who have shaped legal practice. But the Loyola Law Review has also published the thoughts of presidents, presidential candidates, presidential advisers, cabinet members, and ambassadors; Supreme Court and state supreme court justices, federal and state appellate judges, federal and state trial judges; U.S. and state attorneys general, solicitors general, governors, and other senior federal and state executive officials; federal and state senators and representatives, and local legislators and executives; and national heroes, both recognized and less recognized than they should be."

An academic of the Law School, the LLR is an experience like no other. “The greatest importance of LLR – like Loyola’s other law journals – is as a training ground for students,” says Professor Justin Hughes, Hon. William Matthew Byrne, Jr. Chair and faculty adviser to the LLR. “Not only is it an environment in which they learn not substantive law and the demanding process of preparing legal materials, it’s an environment that prepares them for the collaborative work of judicial chambers, law firms and in-house corporate practice.”

The Law Review has long been a launching pad for great legal writers. Professor Stan Goldman ’75, himself a prolific author of law review articles and books, called his tenure as law review editor and staffer transformative. “Being on the law review gives you a true understanding of what goes into legal scholarship,” he says.

That sentiment was echoed by Cory Burleson, managing editor for the 2017-18 year. "It is an honor and a privilege to be a part of LLR at such an exciting time in our history," he says. "Over the past 50 years, LLR has built its reputation by publishing high caliber legal scholarship through countless hours of work from student editors. I look forward to seeing what future editors can accomplish over the next 50 years."

Through it all, the impact of the LLS has been highly measureable. “The Loyola of Los Angeles Law Review (LLR) is an important forum for legal scholarship and research,” says Professor Hughes. “In July 2017 alone, there were more than 11,000 downloads of LLS articles, notes and comments from Digital Commons – and that doesn’t count how many scholars, courts and practitioners access LLR materials from Westlaw, LEXIS and our subscription base.”

The LLR plans to continue its work on the leading edge of legal discourse. It is planning upcoming symposia publications on immigration law and the Defend Trade Secrets Act. It is also hosting a 50th anniversary celebration with alumni from all 50 years of its history.