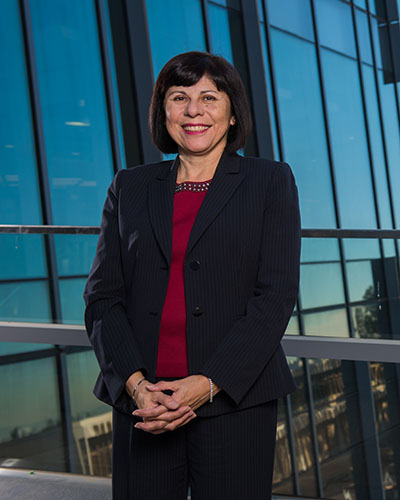 Having witnessed firsthand the discrimination encountered by her parents as Mexican immigrants, pathbreaking attorney Maria Villa ’86 was an early advocate for equity and inclusion in both the legal academy and the legal profession.

“I saw the injustices. I saw a lot of double-standards that made me think, ‘That shouldn’t be; that’s not fair,’” said Villa, who as a 2-year-old immigrated to San Diego from Tijuana, experiencing the hurdles faced by members of the Latinx community.

Equipped with her own unique experience, Villa has long looked for ways to help aspiring Latina lawyers succeed in law school – and in practice. This has been informed by her participation in La Raza de Loyola during her time as a student, when she also represented Spanish-speaking employees in hearings before the California Unemployment Insurance Appeals Board. Over the years, this has included an awe-inspiring commitment of both her time and resources at Loyola Law School and beyond.

Villa has been a cornerstone of support for Latina students for more than two decades. In 1998, she and husband Steve Lathrop ’86 established the first LLS scholarship exclusively for Latina students. Lathrop insisted on naming the scholarship for Villa instead of their law firm after seeing the hurdles Villa overcame. Currently, the Loyola Law School Maria D. Villa Scholarship provides financial assistance to a student active in the Loyola Immigrant Justice Clinic (LIJC).

Meanwhile, Villa has also given generously of her time. She is especially proud of her work over the past two decades mentoring Loyola Law School students who, like her, are Latinas.

“Out of all I have accomplished, what warms my heart is that these Latinas I mentored are not only leaders in our profession giving back to our community, but they also support Loyola and mentor others,” Villa said.

Many have gone on to leadership positions in the Mexican American Bar Association (MABA) and Latina Lawyers Bar Association (LLBA), which Villa co-founded. And while most of her mentoring has been informal, one student she worked with through the law school’s formal program, Monica Guizar ’98, is the current MABA president.

One close friendship began as a very informal mentorship when the mentee was still a high school student interested in becoming a lawyer one day. Now, Marissa Montes ’12 is the director of the LIJC. “I saw myself in her,” Villa said. “She always had a passion for immigrants’ rights even in high school. We’ve been along on her journey since.”

That journey involved Montes working to establish the immigration clinic during her second year as a Loyola Law School student. “They started from scratch,” said Villa, who helped out by serving on the clinic’s board and connecting Montes with the Los Angeles legal community.

“Since then, I have helped spread the word about the clinic by inviting friends, colleagues and potential donors to learn more about it and to attend clinic events,” said Villa. She recently moderated an LIJC panel following a screening of the documentary “Status Pending,” a film by Priscilla Gonzalez Sainz that follows first-generation immigration lawyers as they strive to help immigrants obtain safety and status in the U.S.

Beyond LLS, Villa has helped build pathways for Latina lawyers in a number of ways.  She co-founded the LLBA, served as president of MABA and was the first Latinx attorney to serve on the California State Bar’s governing board.

Perhaps closest to her heart is the Pipeline to Law program she created at her undergraduate alma mater, California State University, Dominguez Hills. Designed to increase the pipeline of law students from diverse backgrounds, the program annually provides 20 undergraduate students with access to a leadership workshop and LLS campus tour with Montes and La Raza de Loyola students. The program has placed CSUDH students in coveted LIJC internships.

Despite all her other obligations, Villa maintains the successful law practice she founded with Stephen Lathrop ’86 in 1992. Their firm has focused on civil litigation and post-conviction matters, including capital cases. One common theme in Villa’s career: being an attorney for others. “I think I’ve always had a social justice bent,” she said.

Villa originally set out to become a certified public accountant. She received her undergraduate degree in business from CSUDH, where she sits on the board of the school’s Philanthropic Foundation.

But law won out. She enrolled in Loyola Law School, where she met several classmates who became lifelong friends. One is Sandra Lee, a senior official in the Federal Emergency Management Agency in Washington, D.C. Another is Leela Ann Kapur, the chief of staff to Los Angeles City Attorney Michael J. Feuer.

“I’ll always be grateful to Loyola because it put together a pretty good group of people,” Villa said, noting how those connections helped shaped her practice – and her life. “We wanted to give back,” she said. “We talked about the friendships we still had that we made back then and how those friendships helped our firm.”