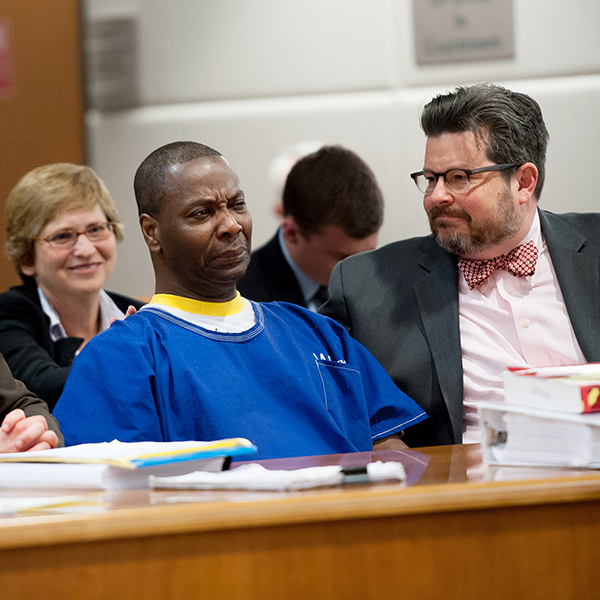 The Project for the Innocent at Loyola Law School, Los Angeles (LPI)

The Project for the Innocent at Loyola Law School, Los Angeles (LPI) will celebrate Innocence Day today at 4 p.m. with a talk featuring exoneree Gary Tyler and a screening of “Cast the First Stone,” a documentary depicting Tyler’s time leading a prison drama club. To be held on Loyola’s downtown LA campus, the screening will celebrate today’s order by Los Angeles Superior Court Judge Katherine Mader proclaiming LPI’s client, Kash Delano Register, actually innocent of the murder for which he wrongfully spent 34 years in prison.

The ruling enables Register to participate in the voting process, among other things. For Register, the moment was bittersweet. “When I was 19 years old, I was convicted for a murder I had nothing to do with. I was placed in a cage and told I could never return to my family and community. I lost my freedom, my future and my place in society. But perhaps most importantly, I lost my name,” said Register. “Even though I knew I was innocent, Kash Register was no longer the name of a nice, respectful kid with a bright future. It was the name of a despised murderer and I couldn’t do anything to change it back. I can never regain the 34½ years I spent in that cage. I can’t go back in time and have a chance to raise my daughter. But today, when the Hon. Judge Katherine Mader gave me a finding of innocence, I got my name back. Now, I have a chance to be me again. And it means everything to me.”

The documentary “Cast the First Stone” depicts a story similar to Register’s. It follows the prison life of Tyler, who was convicted and sentenced to death by an all‐white jury when he was 17 years old—the youngest person on death row. Tyler served 41 years in Angola State Prison in Louisiana for a crime he did not commit until his release on April 29, 2016.  The documentary was directed Emmy Award‐winning and two‐time Academy Award-nominated documentary filmmaker Jonathan Stack. Register for the screening, at which MCLE is available, at lls.edu/garytyler.

“Kash Register’s story is just further proof of the inherent risks of the death penalty,” the campaign said in a statement. “The justice system makes errors which sometimes take decades to correct. With the death penalty there is an unavoidable and irreversible risk of executing an innocent before the truth comes to light.“

The campaign added: “Prop 66, which recklessly tries to rush justice and puts death penalty cases in the hands of inexperienced attorneys, only makes the problems worse. Prop 62, which ends the death penalty and replaces it with life in prison without parole, is the only way to ensure California never puts an innocent person to death.”