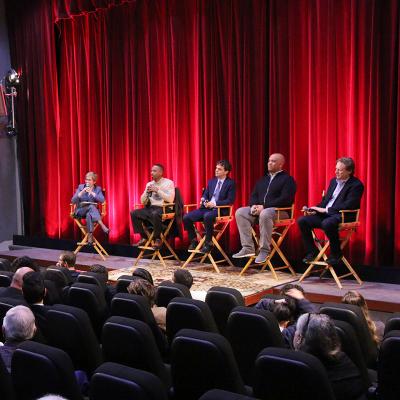 A full auditorium of students, faculty, staff and friends applauded at the end of the movie, which is based on the real-life story of renowned social-justice lawyer Bryan Stevenson (Jordan). The movie focuses in particular on his work to free Walter “Johnny D.” McMillian (Foxx), a death-row inmate wrongfully convicted of murder because of faulty police work and prosecutorial misconduct the centered around issues of race.

After the ending credits rolled to a thunder of applause from the audience, panelists from across the university took to stage to discuss the film. The panelists included Obie Anthony, exonerated client of the Loyola Project for the Innocent (LPI); Michael Petersen ’16, LPI attorney; Marc Pitre, assistant professor, SFTV; and Chris Hawthorne '00, LLS professor and director of the Juvenile Innocence and Fair Sentencing Clinic (JIFS). Laurie Levenson, LLS professor and founding director of the LPI, served as moderator.

For his part, Anthony recalled experiencing the same type of hopelessness McMillian, having given up on a system that he believed failed him. “I knew that I was innocent. It was just for someone else to see it, to read it,” he said, then continued by addressing the LPI attorneys and students in the theater. “And when you all got your hands on that case, it was like sunshine coming through a dark cell. My goodness I was so happy.”

Levenson, whose LPI clinic is responsible for the release from prison of eight wrongfully convicted clients, was among several panelists who commended the movie for its realism. “I’m watching it, looking at the law part, and thinking, ‘Boy they got that right,’” she said. “They even got the names of the cases right.”

Later, Hawthorne credited the movie’s primary subject, attorney Stevenson, for inspiring much of his work at the JIFS clinic, which seeks justice in the cases of adults sentenced as juveniles to life terms or their functional equivalents.

“The Juvenile Innocence and Fair Sentencing Clinic would not exist if it was not for Bryan Stevenson,” he said. “Like Bryan I represent juveniles who are in the California prison system. Like Bryan, most of my clients are not innocent but guilty.

Hawthorne recalled Stevenson’s guidance after the U.S. Supreme Court opinion in Miller v Alabama, which held that it was cruel and unusual to impose a life sentence on a juvenile. “Bryan got on the phone with everyone who does this kind of work and he said, “How do we make this meaningful? Because a case is just a case. You can’t make it meaningful unless you go out and make it meaningful every single day and make it mean what you want it to mean. That is what we have been doing in California. That is what my students have done for the last seven years.”

This was not the first LLS discussion of "Just Mercy," which is set for wide release in January 2020. On Nov. 4, Foxx appeared on the LLS campus to discuss themes from the movie with attorney and author Ben Crump and LLS Professor Samantha Buckingham. Read more>>