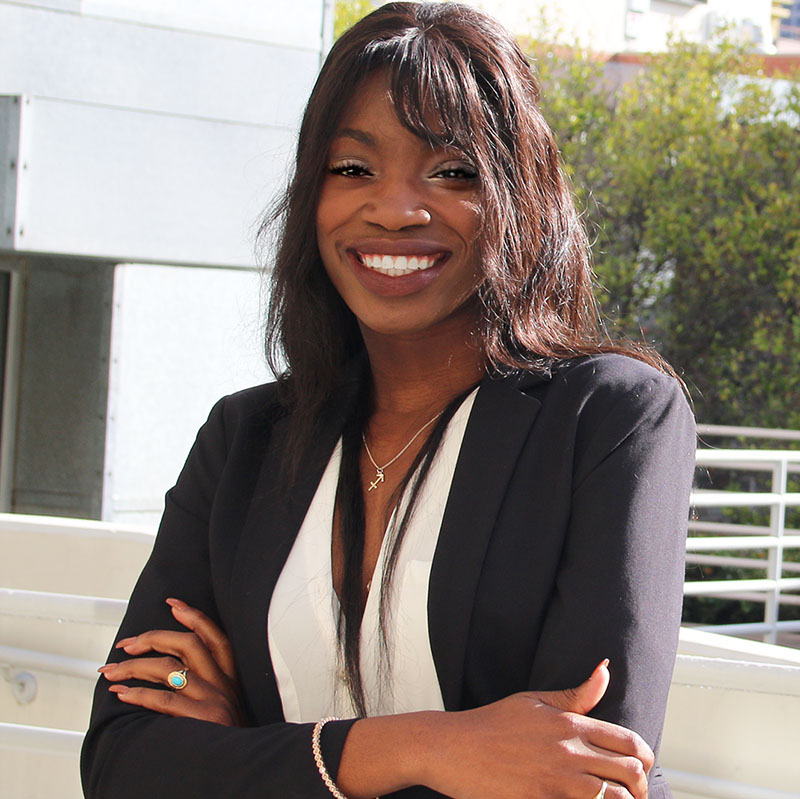 Joanna Ogunmuyiwa was impressed with Loyola Law School when she first took a tour of the campus. Her student tour guide seemed to know everybody, and everybody seemed to know him.

“I loved that about Loyola,” she says. “Everyone was talking to him.”

Ogunmuyiwa followed her guide’s lead. Now in her third year at Loyola, she is president of the Day Student Bar Association (DSBA). Everybody knows her, and she knows everybody.

“Partly that’s because I’m nosy, but also because everybody’s so friendly.”

That includes professors, who willingly make time to speak to students after class and even outside office hours, she says. Ogunmuyiwa found that out early her first year when her Criminal Law professor gave her advice on how to write better case briefs. (Hint: Keep them brief.)

One of her roles as DSBA president is serving as a liaison between the Dean’s Office and students with issues such as final exam conflicts. She always finds an open ear from Dean Michael Waterstone and other administrators. “If I or the board make a request, they never make me feel that I can’t solve it,” she says..

The Student Bar Association’s main task is overseeing the funding for the school’s nearly 50 student organizations, cultural groups and legal specialty bars and support them in hosting speakers and coordinating events. The association sponsors its own events and projects, too, including a schoolwide mentoring program, job fairs, the Barrister’s Ball and monthly social outings off campus.

Exuberant and outgoing, Ogunmuyiwa is a graduate of a small high school in Texas and earned a degree in acting from New York University’s Tisch School of the Arts. The daughter of Nigerian immigrants, she also worked for the U.N. High Commission for Refugees after college.

Ogunmuyiwa’s work with the U.N. and other social justice groups persuaded her to become a lawyer rather than an actor. “I went to law school because I saw the good that I could do with a law degree,” she shares.

At Loyola, Ogunmuyiwa is pursuing the Criminal Justice Concentration, which provides its students with a template of courses, advisor and experiential learning requirements to help them excel in practice. One of her favorite classes has been the Death Penalty Law Seminar taught by Professor Sean Kennedy, the former federal public defender for the Central District of California and current Kaplan & Feldman Executive Director of the Center for Juvenile Law & Policy.

Kennedy, is inspiring and “really connects” with students and his topic, says Ogunmuyiwa. “You go into the class wanting to do one thing, and you come out wanting to save the world.”

Toward that end, she has at various times volunteered off campus with an immigration rights organization, a domestic violence clinic and Christian Legal Aid of Los Angeles.

This semester, Ogunmuyiwa is participating in the Capital Habeas Litigation Clinic, in which she is embedded with the Federal Public Defender’s Capital Habeas Unit, helping clients challenge their death sentences. The clinic is one of many experiential programs that satisfy the Criminal Justice Concentration’s experiential requirement.

“I get involved in a lot of things, and at Loyola, I can do that.”