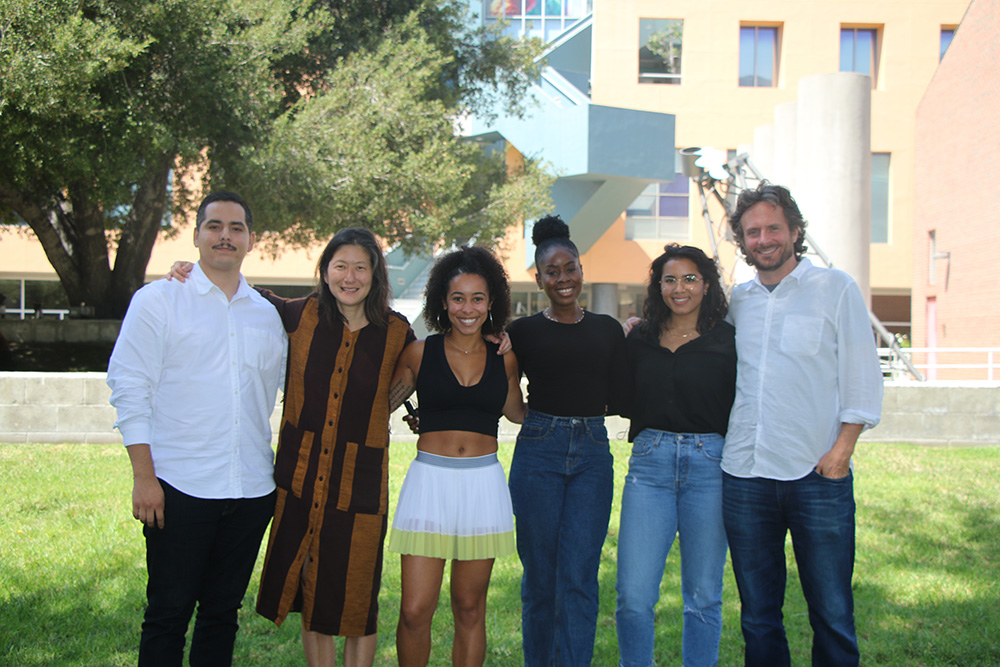 “Being a LARC fellow means that you have to engage in the political process more than you normally would,” said third-year student Eduardo Casas while discussing his work as a member of the first class of LARC Fellows, the name given those pursuing research projects as part of the Loyola Anti-Racism Center inaugural class of research pioneers. “That means that you're doing traditional research like any research assistant would but you're also making connections with legislators, community organizers and any community stakeholder that has an interest in what we're doing.”

LARC embraces its moral and professional duty to confront and dismantle racism in all forms. Bearing this in mind, the fellows spent their summers advancing anti-racism advocacy, research and policy work with the goal of providing the necessary evidence and legal framework to enact meaningful change. “LARC is a broad umbrella for different projects that are collectively geared towards addressing systemic racism,” says Casas. “But each project within the center has its own components.”

While contributing to initiatives such as the California Assembly Constitutional Amendment 3 (ACA 3), which would amend the state constitution to end involuntary servitude, fellows advocated for a stronger, more robust interpretation to deal with racism and anti-subordination policies. “We had the opportunity to collaborate with the people who are working on the proposal of ACA 3,” said third-year student Rachel Jacobs. If passed, “it would remove the Enslavement Clause from the California Constitution so that folks who are imprisoned right now cannot be forced into labor.”

Serving as a capstone experience for these students entering their final year of law school, the assignments they took required them to draw from lessons learned up to this point in their careers. “Throughout law school, I've had professors who tried to highlight specific components of the judicial process where a court makes a presumption or where a court is willing to see a link between disparate impact policies and the harm to various classes,” Casas said. “This experience brought all that together for me in that now I'm able to approach this policy work from an informed perspective.”

By taking a holistic approach to issues raised in the interpretation of the 13th Amendment, one of three hallmark amendments passed during Reconstruction to abolish slavery and establish civil and legal rights for Black Americans, the fellows learned to leverage historical context in the formulation of an argument.

“How the Court interpreted [the 13th, 14th and 15th Amendments] following their passage limited those amendments in the legislation in a way that the Congress did not intend,” said Robert Vaghini, a fourth-year evening student at LLS. “Congress meant for them to promote and protect civil rights and give the federal government the authority, and I would argue preemption over states’ rights when it comes to the civil rights realm of litigation.”

Vaghini, whose community-organizing experience includes spearheading the school’s “LLS Votes 2020” initiative galvanizing student engagement ahead of the 2020 general election, views his fellowship as an opportunity to participate in research projects that are aimed at addressing racism that exists not just through society but within the legal field itself. “My hope for this moment is, much like the reconstruction era, and like the civil rights era in the 1960s, is that during these sparks where there is an actual chance for progress, that this one succeeds and finally addresses systemic injustices,” he said.

Vaghini described LARC Fellows as responsible for doing both the legal research and writing aspects of policy advocacy, but also for connecting with people who are enacting change from a different angle and discovering avenues to help each other succeed. “Lawyers need to play a role, almost supportive in nature, in using our ability to research, find data and compile information in a way that is succinctly presented,” said Vaghini, reflecting on how attorneys can shape society’s interpretations on race and law.

By empowering communities that have ultimately been left behind throughout history, these students observed how the law has been used to stifle change and maintain a system that continues to function detrimentally to those it should serve.

“The fellowship gave me a lot more to think about in terms of how I can influence change and make a difference,” said Jacobs, reflecting on her contributions to the team. “I used to think that I either had to be a defense attorney or I had to be doing something in civil rights, but every single area of the law needs a serious intervention, so it really opened opportunities in terms of practice fields, because I know that wherever I am, I can be a part of creating change.”