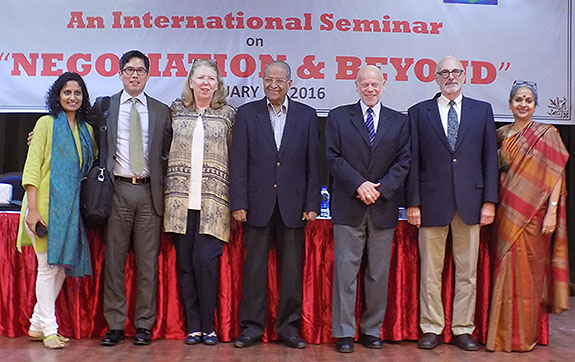 In the U.S. today, alternative dispute resolution (ADR) processes such as mediation are a staple feature of any litigator’s practice.  Many state and federal courts, such as the U.S. District Court in Los Angeles, require parties in most civil cases to attempt mediation.  And upwards of 60 percent of cases referred to mediation settle.

But ADR has still to catch on to most of the rest of the world.  Even in the European Union, the actual use of mediation is still surprisingly low despite the existence of numerous ADR laws on the books.  The situation is even more challenged in the developing world, where there is little in the way of a legal infrastructure to support mediation.  Attorneys are typically highly skeptical of new ways of doing things—especially when they might make disputes (and associated fees) go away faster.  Old habits and mindsets die hard.  Different cultural, historical, and jurisdictional factors may also inhibit the uptake of mediation in these locales.

Professor Hiro Aragaki studies the evolution of ADR law and practice in the developing world.  He recently established the Loyola Law School, Los Angeles Project on Dispute Resolution and Development (ProDRD), whose mission is to promote ADR-related research, training and policy initiatives in the Global South.

One of the biggest hurdles that developing economies face in terms of attracting foreign direct investment is that local courts are unable to provide effective access to justice, either because they suffer from unimaginable backlogs or because of concerns about judicial corruption or partiality.  In these locales, ADR holds out the promise of a more efficient and satisfactory dispute resolution process that also helps preserve business relationships.

Earlier in the spring semester, Professor Aragaki was invited to join a distinguished delegation that traveled to Bangalore, India—a country whose judiciary currently suffers from a backlog of 30 million cases and where the average length of a case is 15 years.  The delegation was organized by the Foundation for Sustainable Rule of Law Initiatives (FSRI) and included Victor Schachter (Fenwick & West partner and Founder of FSRI), the Hon. Rebecca Westerfield (mediator & arbitrator at JAMS) and Prof. Jay Folberg (former Dean of USF Law School and now a mediator at JAMS).

During trip, the delegates visited the Bangalore Mediation Centre, a court-annexed mediation program affiliated with the Bangalore High Court, where they held high-level meetings with several judges and court mediators.  They also gave lectures and presentations on mediation at local law schools and business schools, trained private commercial mediators in cutting-edge mediation techniques and participated in discussions with prominent lawyers and mediators from throughout the country about what can be done to improve the mainstreaming of mediation in the lndian legal system.

During these meetings, the U.S. delegation provided input on a proposal for the first-ever mediation statute in India.  (Although the Indian Parliament recently amended the Indian Arbitration and Conciliation Act (1996), there is currently no legislation from the central government specifically governing mediation.)  The week’s events culminated in a conference in which numerous in-house counsel, lawyers and dignitaries from throughout India participated, including Senor Advocates (the Indian equivalent of a QC), the Chief Justice of the Bangalore High Court and former Justices of the Supreme Court of India.

Professor Aragaki is cautiously optimistic that mediation will begin to take off in India in the next five to 10 years.  “This is an exciting time for mediation in India,” he said.  “But there is still much more work to be done, more skeptics to be convinced and more resources that need to be committed by the central and local governments to support mediation’s growth.  The key will be to ensure that mediation develops in a sustainable fashion for the long-haul, not in fits and starts depending on changing political winds.”  To that end, Professor Aragaki and ProDRD will continue to offer ongoing consultation and support to mediation advocacy groups on the ground.

By all accounts, the trip to India was a success in terms of helping to spread the word of mediation in legal, educational and business settings, in providing advice on legislative and institution-building initiatives and in providing training to mediation practitioners.  As Laila Ollapally of the Center for Advanced Mediation Practice in Bangalore said, “It is hard to express gratitude when it is beyond words.  Each one of you have contributed much to … mediation in India.  Your support, encouragement and guidance leave us energized and ready to take on more.”