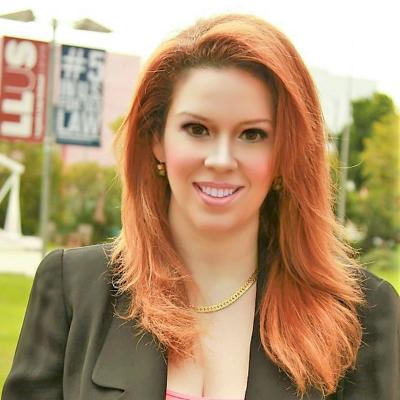 Giancarla Sambo ’17 had solid experience as an on-air personality, producer and business attorney when she decided to pursue an LLM Specialization in Entertainment Law at Loyola Law School, Los Angeles to further elevate her career.

“I saw the discipline of an LLM as valuable,” she says. “I didn’t want to stay a general practitioner in law.”

Sambo was drawn to Loyola for some key reasons, including its proximity to the epicenter of Hollywood, its range of professors with studio backgrounds and its successful alumni.

“Loyola has great classes and experts, and the faculty have great connections,” she says. “They have so much experience in their field.”

Sambo, who received her LLM in May, took classes such as Trademark and Unfair Competition from Professor Jennifer E. Rothman and the Motion Picture Production & Finance Seminar taught by F. Jay Dougherty, the director of Loyola’s Entertainment & Media Law Institute.

For Sambo, the personalized faculty advising offered by Loyola’s LLM made a difference. LLM Faculty Director Aaron Ghirardelli urged her to take a course in Internet Law, which proved integral to her education.

“It ended up being my most enjoyable class,” she says. Taught by Professor in Residence Karl Manheim and Adjunct Professor David Steele, the course focused on intellectual property and cybersecurity law.

“It has to do with being an international citizen,” says Sambo. “Professor Manheim is so well-versed in international law and the way the Internet works.”

A native of San Juan, Puerto Rico, Sambo holds a master’s degree in broadcast journalism from New York University and experience as a radio personality and reporter in New York. She also has worked as a producer and executive in the entertainment and hotel industries.

In 2009, Sambo earned a law degree from the ABA-accredited Inter American University School of Law in San Juan. “Entertainment is something that I know, that I practiced,” Sambo says. “I went to law school because I wanted to be a better entertainment professional.”

Her legal training helped her when she became the Puerto Rico licensee for the Miss America pageant. “I produced the state pageant, recruited the contestants and handled the contracts for suppliers, releases and intellectual property.”

Given her wide-ranging experience, one aspect of Loyola Law School that appealed to her was its large, active Evening Division. That program tends to attract students with careers and life experiences.

“The evening students are people who have been through life out in the real world. That’s something that Loyola offers that I didn’t see that at other schools.”

One other feature Sambo has come to appreciate about Loyola, especially after Hurricane Maria devastated so much of Puerto Rico in mid-September, is its community.

“The people are so wonderful and so kind,” she says. Even though she and her family fortunately escaped most of the hurricane’s damage, many in the Loyola community offered help and comfort, she says.

“When I came back on campus, everybody at Loyola was very supportive,” Sambo says.

Enroll now and use Loyola’s LLM to make a difference in your career. Schedule a campus visit.