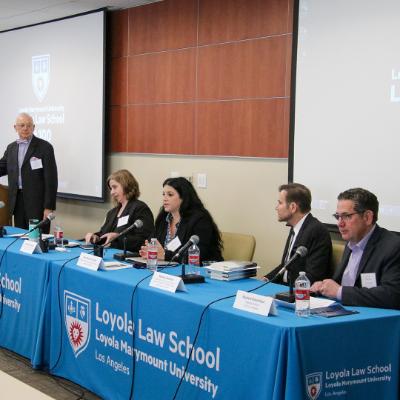 History does repeat itself. That was the chief concern of the panelists who spoke at the Center for the Study of Law & Genocide (CSLG) symposium, “When It Can’t Happen Here: Genocide in an Age of Nationalism,” held on the law school’s downtown L.A. campus on Friday, Feb. 28.

“As an historian, I have to say I’m alarmed by the resurgence of the kinds of radical nationalism that first emerged in the late 19th Century and led most notably to the mass murder of European Jews in the middle of the 20th,” said Elizabeth Drummond, associate professor and chair of history at LMU.

Looking back at the type of fervor that spawned the Nazi movement, the speakers on the panel “Understanding the Relationship Between Nationalism and Genocide: When Does It Happen Here?” addressed the roots of fomenting hatred. That led to many comparisons to the past in the panel moderated by Michael Bazyler, 1939 Law Scholar in Holocaust and Human Rights Studies at Fowler School of Law, Chapman University.

The wide-ranging, interdisciplinary discussion featured scholars from an array of pursuits. Organized by Rajika L. Shah, CSLG deputy director, the event also included a glimmer of hope by keynote speaker Benjamin Ferencz, a lead prosecutor at the Nuremberg trials.

“I’ve spent my whole life trying to create a more peaceful world. I appreciate all the work that Loyola Law School and others are doing,” said Ferencz, recipient of the CSLG’s Lemkin Award, given to those with a demonstrated commitment to social justice and international human rights within the genocide context.

Along with Richard Hirschhaut, regional director, American Jewish Committee L.A., the panelists made clear that brand of perseverance is required by today’s political climate, which shows hints of the past.

“We ought to be alarmed by the resurgence of nationalist and populist movements today, which have tapped into various resentments and a blatant nationalism that has been perhaps laid dormant for many decades – whether that’s in Central Europe, or in England or in South Asia, or here,” said Drummond.

Panelists consistently drew lessons from World War II. CSLG Founding Director Stan Goldman read from his recent book, “Left to the Mercy of a Rude Stream: The Bargain That Broke Adolf Hitler and Saved My Mother.” Appropriately, he cited Voltaire, remarking, “Those who can make you believe absurdities, can make you commit atrocities.”

Ferencz, chief prosecutor in Nuremberg on the trial of the 22 SS defendants in charge of the Nazi killing squads responsible for the murder of more than 1,000,0000 Jewish and other people, provided the day’s moment of levity. At the conclusion of Ferencz’s lunch talk, when the group sang “Happy Birthday” on the occasion of his recent 100th birthday, he said “I’m also 100, like Loyola Law School!”

The event concluded with the screening the documentary, “Elder Voices: Stories for These Times.” A new film from Academy Award-winner David Goodman, it tells the stories of Japanese-Americans, European Jew, and conscientious objectors who came of age during the Great Depression and World War II.

About the Center for the Study of Law & Genocide (CSLG)

The CSLG couples research and practical advocacy to help victims of genocide achieve justice. Founded in 2007, it aims to promote legal scholarship on genocide and mass violations of human rights with a particular focus on improving and making more accessible and effective legal resources and remedies both in the U.S. and internationally. It also seeks to train current and future legal practitioners on using existing remedies to help victims of genocide and mass violations of human rights achieve a measure of justice. Learn more on the CSLG website.