For New Board of Governors President, Service is the No. 1 Priority 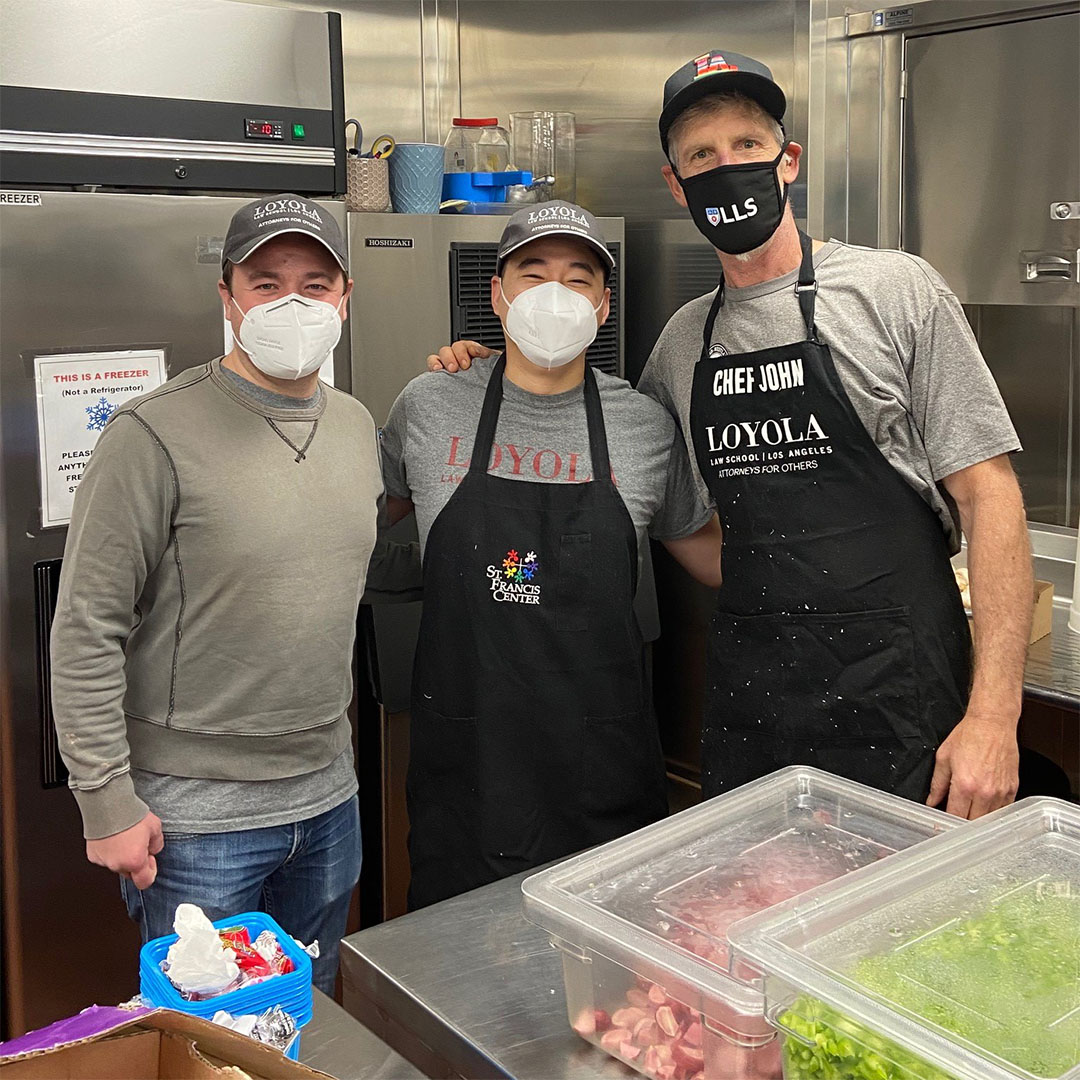 From left: Alumni Association Board of Governors President Dean Conklin '14, Anthony Lai '12 and John Horn '96 volunteering at the LLS Attorneys for Others monthly breakfast shift at the St. Francis Center.

As the Resource and Training Attorney for the Children’s Law Center of California (CLC), LMU Loyola Law School Alumni Association Board of Governors President Dean Conklin '14 is responsible for ensuring the organization’s 500-plus lawyers, paralegals, investigators and support staff are best equipped to serve their youth clients with open child welfare cases. He also leads a number of recruitment and development programs at CLC, including the organization’s Post-Bar Law Clerk program, fellowship program and its Child Welfare Law Specialist (CWLS) certification program. And he credits his LLS education with preparing for the many twists and turns his role has brought him.

“As an applicant, a student and now an alum, I’ve seen how Loyola—more than any other law school—puts public interest first,” he said. And the same could be said of Conklin.

Conklin is as committed to service now as he was as a first-year student, when he joined the Public Interest Law Foundation (PILF) and became its 1L representative. Since graduating, he has held an active role in the Alumni Association Board of Governors. The group organizes such initiatives as the Attorneys for Others program, where alumni serve the community through various efforts including a monthly breakfast shift at the St. Francis Center. The group also plays a key role in planning alumni events like Connecting Points sessions, which provide graduates opportunities to burnish their skillsets in a range of practice areas.

“I genuinely believe in this idea that attorneys have a greater obligation to the community,” said Conklin. “As president of the Alumni Association Board of Governors, I’m looking forward to further prioritizing public service as an essential aspect of what it means to be a ‘Loyola Lawyer,’” he said.

The Board of Governors is also charged with planning what is typically the largest LLS event of the year: the Alumni Grand Reunion. The event includes the bestowal of the Recognition Award, presented to members of the LLS community who have demonstrated a continuing dedication to Loyola Law School, public service or the legal community in general. Additionally, the group annually honors graduating LLS students with the Board of Governors Award in recognition of their significant contributions to the law school and society.

In his role as president, Conklin aims to increase the efforts to connect Loyola Law School alumni who live and practice outside of the greater Los Angeles area. Case in point: The board has filled vacancies with an alumnus living in Washington, D.C., and another from Loyola’s Orange County Alumni Council.

“The legal expertise, opportunities and networking abilities within the Loyola alumni community have never been limited to the Los Angeles area,” said Conklin. “It’s time for the board to more accurately reflect the national presence that so many Loyola graduates have already established.”

In many ways, Conklin is paying forward the generosity already shown him as a law student. He once sought advice from Sande Buhai, director of the Public Interest Law Department, for opportunities to gain experience. With Buhai’s help, Conklin scored an externship with Mental Health Advocacy Services (MHAS) after his first year of law school. “The faculty and administration at Loyola are invested in the students to a degree that I’ve never seen before,” he said.

“On my first day at MHAS, I was already working directly with clients by noon,” he said. With only the first year of law school under his belt, the pressure was on. “I think it’s important to always remember that in direct service, what an attorney or intern calls a ‘case’ is someone’s life. That person lives that reality—they don’t get to close the file and check out. Our clients are human beings, and often their needs, be it medication, services, or shelter, are urgent.”

He thrived from direct interaction with clients, and it affirmed for him that public interest was a natural fit. In his second year at LLS, Conklin sought experience in juvenile rights work. “Working in children’s rights just made sense to me. Everyone has a childhood; mine was safe and with my family. I think all children should be afforded that whenever possible,” he said.

Conklin enrolled in Professor Gary Williams’ Civil Rights Litigation Seminar, which placed him at Public Counsel doing policy work for the Children’s Rights Project. It was there that Conklin cemented his passion for juvenile advocacy. “It’s an incredible experience to be a public interest attorney. Loyola has given me the opportunity to come into people’s lives and try to make things a little easier, and hopefully empower others along the way,” he said.

Throughout his time at the law school, Conklin remained heavily invested in PILF. He was elected vice-chair his second year and served as the co-chair in his third year. The student organization raises tens of thousands of dollars each year to fund student public interest projects and summer jobs. For Conklin, handing over the award money to a peer who works for a great cause was the best part.

“When I think of my experience as a student, the people stand out the most,” he said. “I loved being surrounded by smart and ambitious students who had really worthy goals, and staff and faculty who worked tirelessly to help those students achieve them.”

As a student, Conklin frequently reached out to alumni through PILF. “The trick is to tap into the resources that Loyola offers, since the classroom only takes you so far,” he advises. “I feel that Loyola has given me a lot of practical experience through internships and clinics, and that experience really prepared me to be an attorney.” In his third year, Conklin worked in Loyola’s Youth Justice Education Clinic whose mission is to prevent juvenile offenders from entering the school to prison pipeline. In addition, he externed at the Alliance for Children's Rights, which advocates for the rights of impoverished and abused youth.

After graduation, Conklin was awarded one of the law school’s coveted Post Graduate Fellowships in Public Interest Law. That enabled him to assert legal access to mental health services for foster youth at Learning Rights Law Center. He later moved on to Children’s Law Center of California, initially as a staff attorney for three years and then to his current role in the firm’s administrative office.

Upon graduating in 2014, PILF selected Conklin as the recipient of the Sande Buhai Award for his commitment to public interest law. For his efforts as a student at Loyola, Conklin was honored with the Board of Governors Award that he is now charged with conferring on graduates today, taking things full circle.

“The best part of being an involved alum is that you get to watch the tide rise with the work students are doing,” he said. “Loyola students today are not just smart and hardworking; they’re compassionate, innovative, and creative—the caliber gets higher every year. I think if I were a student today, I’d be toast.”