Library Director Guides Students at All Chapters of Career 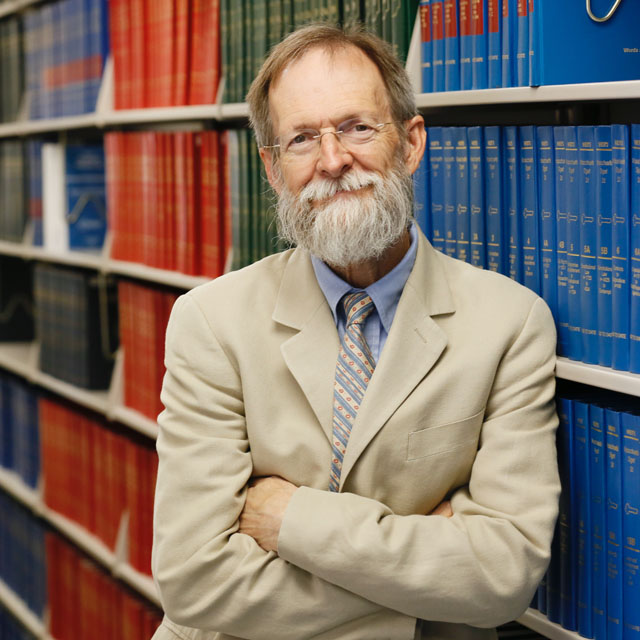 When William M. Rains Library Director Daniel Martin describes his expansive repository of books and technology as “home away from home,” he’s not exaggerating – much. The facility boasts an array of study and relaxation spots replete with sofas and loveseats, an extensive portfolio of cell-phone chargers and other necessities available for check-out, and a full-kitchen complete with oven. That’s a good thing, since Professor Martin annually bakes 600 cookies every August to welcome new students to their new “home” on the first day of school.

As a professor of both Legal Research & Writing and Ethical Lawyering, Martin encounters students at pivotal points in their academic arcs. In Legal Research & Writing, he introduces first-year candidates to an important lifelong skill: navigating and understanding case law, statutes, secondary sources and other vital legal documentation. In Ethical Lawyer, he brings those skills full-circle, helping students master the attorney-client relationship on a foundation of federal and state rules. It is no surprise that Martin often tells his students that these two classes are the most important of their law school careers.

“Students may think they’ll have minions to do the research for them after they graduate, but when they get to the firm they find out they are the minions,” he said. As a professor of law and the director of the law library, Martin makes a difference in students’ lives in two distinct ways: He teaches them the importance of effective and ethical research, and he makes sure that they feel right at home in Loyola’s library. ‌

‌‌Martin works hard to ensure that his students understand the finer points of research. “They’ll spend the first few years of practice doing it,” he says. But he also strongly emphasizes ethics; graduates, he notes, will face ethical dilemmas as soon as they begin practicing. Martin echoes the mantra of alumna Judge Sandra Klein ’92, who emphasizes the importance of ethical issues when swearing in Loyola alumni to the bar. “If lawyers can’t spot the ethical issues, they will not even have the opportunity to make the right ethical choices,” he says.

At the library, Martin makes it his mission to ensure students have access to everything they could possibly need to succeed academically. From maintaining an organized library catalog to keeping the library’s website user-friendly, he wants students to have all the resources they need to research properly and comfortably.

Under Martin’s stewardship, the library announced the formation of the Peter M. Tiersma Special Collection. Named after a late professor who amassed a treasure trove of historic texts, the collection contains more than 400  ancient legal documents. Highlights include patent letters from France’s King Louis XV, a page from the Ge’ez Bible from 17th-century Ethiopia and important legal documents prepared for Napoleon and other world dignitaries. The collection serves as an important link to the past for an institution continually looking toward the future.