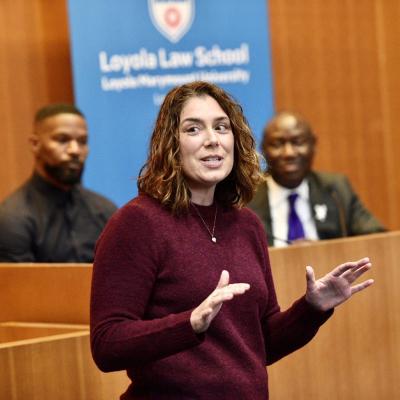 During a wide-ranging discussion of race and social justice held at LMU Loyola Law School on Monday, Nov. 4, attorney and author Ben Crump told Academy Award-winner Jamie Foxx and moderator Professor Samantha Buckingham that campuses are Ground Zero for in the fight for equality.

“We have to try as best we can to speak truth to power,” Crump told a room full of law students and professors. “We have to make sure that the young people, especially our children, are more intelligent than those who seek to oppress them. We will not win this battle with guns and violence. Here, in the schools of America, is where we win this war.”

The talk, part of Crump’s tour to promote his newest book, “Open Season: Legalized Genocide of Colored People,” offered a glimpse into the style of advocacy that propelled Crump into the spotlight as the attorney for families of such high-profile victims as Trayvon Martin and Michael Brown.

“There was a reason Trayvon became the No. 1 news story in the world: because people made a conscious effort to say, ‘We are going to make this black child – who was killed in a place called Sanford, Florida, who most people didn’t know – matter,” said Crump, who commended Foxx for wearing a Trayvon Martin shirt during a BET Awards show.

For his part, Foxx discussed his interest in social justice and what drove his interest in the upcoming movie, "Just Mercy," in which he stars as a man wrongfully convicted of murder in a case that turned on racial lines. A special preview screening of the movie will be held on Thursday, November 21 at 7:15 p.m. PST in the Life Science Auditorium on LMU's Westchester campus.

"It's a powerful movie. It's also a lesson in humanity," said Foxx of the vehicle in which he plays an African American man wrongfully convicted of killing a white woman. "I want all the people to understand the humanity of it." Foxx later told reporters gathered on campus: "It’s 2019. We shouldn’t have to be having these conversations. The word race shouldn’t mean anything.”

During the talk, Crump explained how he decides to take a case. "My personal hero is Thurgood Marshall. Justice Marshall would always take cases not only that would impact that individual but would have a larger impact on society,” said Crump.

Crump’s newest book, “Open Season,” reveals the systemic injustices faced by minorities, illuminating how discrimination in the courthouse devastates real families and communities. In it, Crump presents an analysis of legal tenets from the 13th Amendment to controversial “stand your ground” laws.

The event concluded with a book signing and Q&A during which Crump fielded questions from students like Dominique Anderson, leader of LLS’ Black Law Students Association who helped organize the event along with the Criminal Law Society and Day Student Bar Association.

Learn more: Watch KABC-TV's coverage of the LLS discussion. "Open Season" is available for checkout within the LMU library system.