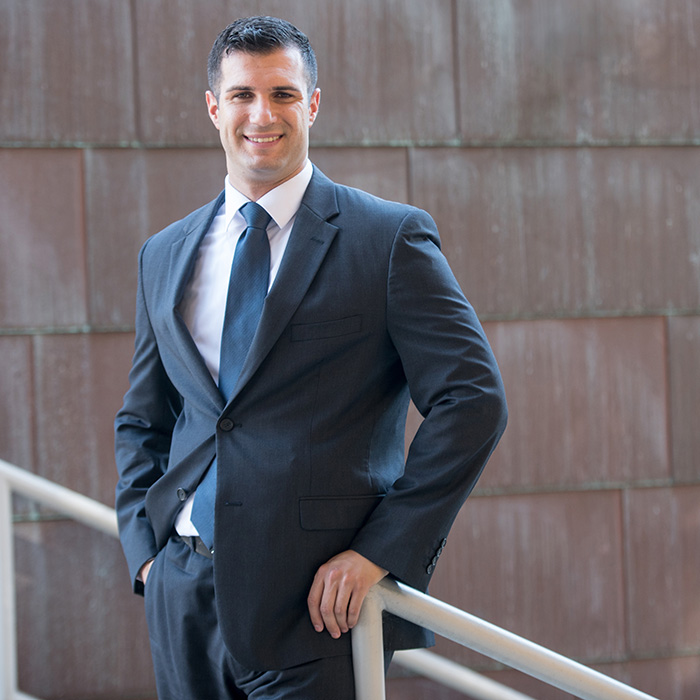 One thing Avrohom Feinstein ’18 learned from his years in the U.S. Army infantry, including two tours in Iraq, is the importance of learning the fundamentals. In basic training, he said, “the first things they teach you are how to shoot, move and communicate.”

Soldiers learn the nuances in the field, Feinstein explained. Before that, “you have to have the fundamentals down.” That’s what he’s trying to obtain from law school now.

For Feinstein, the recipient of a Veterans Scholarship from Loyola, learning the fundamentals refers to acquiring the skills he’ll need to begin practicing in a law firm soon after graduation. “I love theory,” he said, “but I’m mindful that I need the practical skills, and I’m staying focused on why I’m here.”

Loyola is helping him do that. Feinstein spent last summer working full-time as an extern for federal Judge Dean D. Pregerson of the U.S. Central District Court of California in downtown Los Angeles. He researched issues, wrote legal memoranda, drafted orders and even recommended rulings to the judge and his law clerks.

In the evenings, Feinstein took part in an Appellate Advocacy class, where he prepared a 30-page appellate brief and delivered an oral argument in a mock criminal case.

And that was just in the summer. This year, in addition to three other courses, Feinstein is participating in the Civil Litigation Skills Practicum, with Professor Gary Craig. In the yearlong course, Feinstein gets to do “everything from client walk-in up to trial,” including interviewing the client, drafting a demand letter, responding to a lawsuit and more – all in the classroom setting.

“I love it,” he said. Craig, a former litigation partner in an international law firm who was awarded Loyola students’ Excellence in Teaching Award, “is an amazing teacher.”

Feinstein credits another professor for his interest in civil litigation. Professor Simona Grossi teaches Civil Procedure with “so much enthusiasm for the subject that it’s contagious,” he said.

Outside of classes, Feinstein is passing on his enthusiasm for civil litigation to some middle-schoolers as their coach for a mock trial competition.

Feinstein was the captain of the cheerleading team at California State University, Northridge, where he earned his bachelors’ degree after leaving the Army. So now, as a member of the Loyola of Los Angeles Entertainment Law Review, he is writing an article on the Title IX treatment of a new competitive-sport version of cheerleading called “STUNT.”

His focus, though, remains on becoming practice-ready. “I want to hit the ground running” as a new lawyer. “I want to be valuable when I join the team,” he said about his future firm.