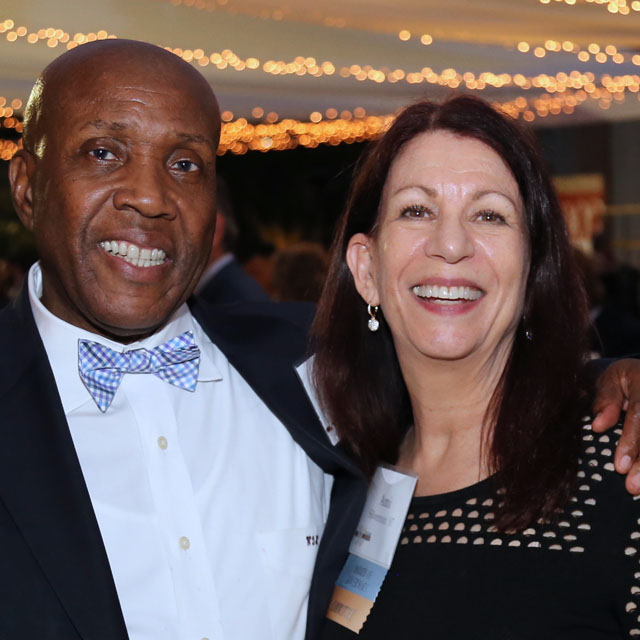 Silverman was instrumental in securing the Ami Silverman Endowment Fund for Summer Stipends, which allow Loyola students to pursue pro bono summer employment while covering their living and other expenses. The program is one facet of Loyola’s student-run Public Interest Law Foundation, which organizes the annual Casino & Auction Night fundraiser to support such work.

This year’s fundraiser will be held on Saturday, Oct. 14, 2017, with hundreds of students, professors and alumni expected to attend. Dubbed “025: We Have a License to Party” in homage to James Bond, the largest PILF gathering ever will embrace the landmark quarter-century anniversary.

Inspired by seeing Silverman’s profile in an issue of Loyola’s alumni newsletter, friend and alumnus Sterling Franklin ’75 developed the idea of endowing a fund in Silverman’s name with the help of a foundation he oversees. Then president of the Loyola Alumni Association Board of Governors, Silverman helped channel the inspiration.

“I immediately thought of PILF and the need for summer stipends that allow students to perform public service in lieu of more lucrative firm internships,” says Silverman, an attorney for the National Labor Relations Board. “Sterling provided the initial contribution, which was followed by a fundraising drive that Sterling matched dollar-for-dollar. Thus, the Ami Silverman Endowment Fund for Summer Stipends for PILF was born.”

Since its inception, Silverman’s fund has supported 26 beneficiaries as they perform important summer work for the public good. Each year, recipients gather with donors, supporters, alumni and friends to discuss their experiences.

“This is always an inspiring occasion to hear how our students have found creative and innovative ways to serve the public need,” says Silverman. “As I discovered when I began my career with the federal government, they gained as much if not more than they gave through their service.”

Finding rejuvenation in her PILF participation, Silverman’s appreciation of public-interest work has grown over the years.

“It has been gratifying to keep in touch with past recipients and to see how many of them stayed in public service after graduating,” says Silverman, a former president of Loyola's Alumni Association Board of Governors. “At Loyola, public interest is not just a curriculum requirement but a calling. I have enjoyed watching PILF grow and mature over the past 25 years, and wish it every future success and it continues to meet the ever-growing needs of our society.”

Make a difference in a public-interest law student’s education: Register for or donate to PILF’s Casino & Auction Night.