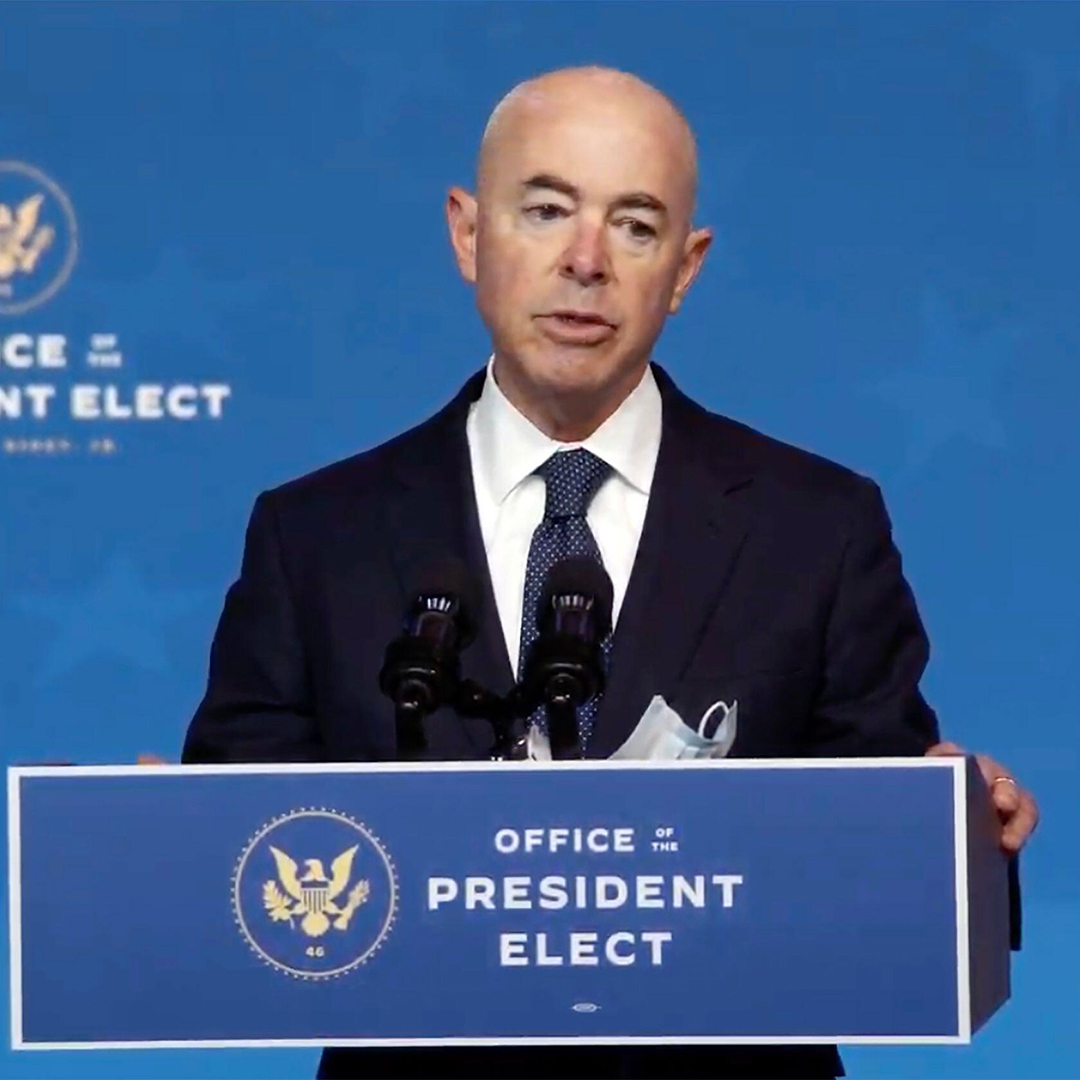 The confirmation of Alejandro Mayorkas '85 to be secretary of the Homeland Security Department is just the latest milestone in a legal career marked by superlatives. Prior to his DHS nomination by President Joe Biden, Mayorkas had served as director of United States Citizenship and Immigration Services (USCIS) and as deputy secretary of Homeland Security in the Obama administration.

No stranger to firsts, the confirmation makes Mayorkas the first Latino to head the department. Earlier in his career, he was the youngest United States attorney at the time, at age 39, when President Bill Clinton appointed him to the California Central District post in 1998. He has also held a number of senior positions at the prestigious law firm O’Melveny & Myers.

"My father and mother brought me to this country to escape communism. They cherished our democracy and were intensely proud to become United States citizens, as was I," said the Cuban-born Mayorkas after being introduced by Biden at a November press conference (pictured). "I have carried that pride throughout my nearly 20 years of government service."

Named a Distinguished Alumnus of the Year by LLS in 2001, Mayorkas has maintained strong connections to his alma mater, where he was a staff member of the Loyola of Los Angeles Entertainment Law Review. He served as an adjunct professor of Trial Advocacy and is a member of the class of 1985 35-year reunion committee.

Public service is a through-line connecting many of Mayorkas’ leadership roles. “I was drawn to public service because it offers the unique opportunity to use one’s law degree and training for the public’s interest,” he said. “The U.S. Attorney’s Office was my number one goal because I am very interested in criminal justice issues, and because of the reputation of the U.S. Attorney’s Office for doing the best, most interesting and complex litigation.”

Mayorkas made a major impact as the leader of 240 assistant U.S. attorneys, especially by forming the Civil Rights Section. “I thought that creating that section would reflect our priority and enhance our ability to bring a specialized experience to bear on that law enforcement arena,” he said.

Mayorkas also developed other innovative approaches to reducing crime. He targeted criminal possession of firearms by using the Racketeer Influenced and Corrupt Organizations Act. He took a holistic approach to preventing crime by allocating federal dollars to create after-school programs for disadvantaged youths and expanding community outreach programs. Mayorkas also served on the Attorney General’s Advisory Subcommittee on Civil Rights, and on the Subcommittee on Ethics in Government.

As an assistant U.S. attorney for nine years, he served as chief of the General Crimes Unit and was recognized with a host of awards. Among them was the U.S. Post Inspector’s Award, the highest honor given by the U.S. Postal Inspection Service, for his prosecution of a man who murdered a postal worker. Mayorkas also earned commendations from FBI Director Louis J. Freeh for his successful trial work, which included guilty verdicts in the Heidi Fleiss tax evasion and money laundering case; and in Operation Polarcap, the largest international money laundering case in the nation.

A tireless advocate for causes both inside and out of the courtroom, Mayorkas has served as the board chair of Bet Tzedek Legal Services; on the board of the Federal Bar Association’s Los Angeles chapter; and on the California Commission for the Fair Administration of Justice, a committee appointed by the California State Senate to make recommendations to ensure fair and effective process in criminal proceedings.

A staunch advocate for children, Mayorkas has been a board member of United Friends of the Children, a nonprofit group dedicated to the well-being of Los Angeles County foster youths. As chair of the Warren Christopher Scholarship Committee, he helped award college scholarships to Los Angeles Unified School District sophomores who succeeded academically despite economic, social and other hardships. For all his community work, Mayorkas was honored with an O’Melveny & Myers Values Award, an annual recognition of two partners worldwide who exemplify the firm’s values of leadership, excellence and citizenship.

Mayorkas has been named one of the “50 Most Influential Minority Lawyers in America” by the National Law Journal, and one of the most prominent Latino leaders in the country.