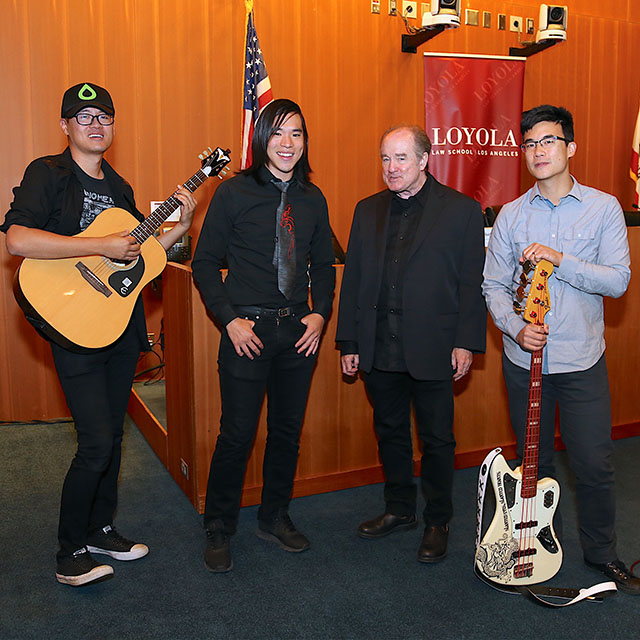 The Slants with Professor Jay Dougherty

Fresh off a landmark victory at the U.S. Supreme Court over a challenge to his band’s trademark application, named plaintiff and bassist Simon Tam joined Loyola Law School, Los Angeles professors for “The Slants Case from the Inside: The First Amendment & Disparaging Trademarks” held in Robinson Courtroom on Friday, Oct. 9. The event concluded with a rousing acoustic performance by the band.

Loyola Professors Aaron Caplan, Jay Dougherty, Priscilla Ocen and Jennifer Rothman joined Tam in a discussion of the intersection of constitutional law, intellectual property and race at play in the U.S. Supreme Court’s June opinion in the case of Matal v. Tam. In its holding, the high court struck down a long-standing provision of federal trademark law prohibiting potentially disparaging trademarks as a violation of freedom of speech. The Slants, an Asian-American dance-rock band, defended on free-speech grounds the challenge to its name as disparaging.

Tam described the origins of his case. “I started the Slants because I wanted to change people’s perceptions about Asian-Americans. Also I wanted to rock,” said Tam. “I didn’t want to start a political project.”

But, inadvertently, he did when his registration application to the U.S. Patent & Trademark Office was denied in 2009 on grounds that The Slants term was racially disparaging. “Our community was using it, rallying behind it, saying, ‘We shouldn’t be ashamed of these eyes or who we are,’” said Tam, who noted that he was bullied as a child and called disparaging names for his Asian ethnicity.

So Tam challenged the denial. “We found that 92 percent of Asian Americans supported using the name,” said Tam. “That was really comforting to us because they never tell you what this means at government office.”

Realizing that his registration application was singled out because of his ethnicity, Tam tried reapplying without mentioning his background. But the group received the same review attorney, who recognized their prior application, again denying it. “Whether we liked it or not, we were going to be judged by our race.”

Tam and the band took their challenges farther, with losses along the way. “We fought the law and the law won,” said Tam. But ultimately, at the U.S. Supreme Court, Tam successfully pled his case.

Based on the prevailing trademark registration tests at the time, denial was no great surprise when The Slants applied for registration, Rothman explained. She focused on the immoral and scandalous test, which “requires demonstrating that the mark is shocking to the sense of truth, decency or propriety…giving offense to the conscience or moral feelings; or calling out for condemnation.”

Noting that the Supreme Court struck down the rejection of The Slants’ trademark registration as viewpoint discrimination, she summarized the court’s takeaways: You can’t ban offensive speech. You can’t deny registration to disparaging marks. It is likely that the ban on registering immoral and scandalous marks is obsolete. And the marketplace is a way to change a name, letting consumers speak instead of court.

The market is not fail proof, however, noted Professor Ocen. “The problem is that minorities don’t have equal access to the marketplace,” she said. “Because the marketplace is corrupted by discrimination, communities of color are not able to push back.”

Rothman noted that free speech can cut both ways, with The Slants’ ruling potentially paving the way for the preservation of other allegedly disparaging registrations. “This decision is a double-edged sword,” she said. “We can’t really have a registration for The Slants without registration for the Washington Redskins.”

No matter the message, professors noted that the First Amendment is a strong protection – particularly for malevolent speech. “There aren’t very many limits with regard to what you can do to hate speech. It can’t just be threatening; it has to be a true threat,” said Rothman.

Picking up on that point, Caplan noted the challenges inherent in regulating speech. “Speech can be used as tool to oppress. For people fighting oppression, speech is a much more important tool,” he said. “Simon’s story shows how this rule that is there to elevate discourse is used in an arbitrary way.”

For now, Tam is satisfied with his multi-pronged victory. He finds solace in the vindication it gives him and his bandmates for creating what he hopes will serve as a positive role model to Asian-American youth. “I wanted to provide a new band that would portray a vision of Asian-American culture – a perspective on what it’s like to be Asian person in music culture,” said Tam, who can barely keep up with the fan mail supporting his move.

In a room full of law students, Tam noted a question they often ask: “’How do you win a Supreme Court case?’” My answer: ‘Stop thinking like attorney & start thinking like an artist.’”

The event concluded with The Slants performing three songs, including, “From the Heart,” which lead singer Ken Shima described as an open letter to the U.S. Patent & Trademark Office. He encouraged the audience to participate by chanting “No” to a series of prompts about allowing injustice. “If you see something wrong are you just going to remain silent?” Shima asked the audience, which collectively replied, “No!”

Want to make a difference in the law? Schedule a campus tour to learn more about how Loyola Law School can equip you to be an advocate for change. 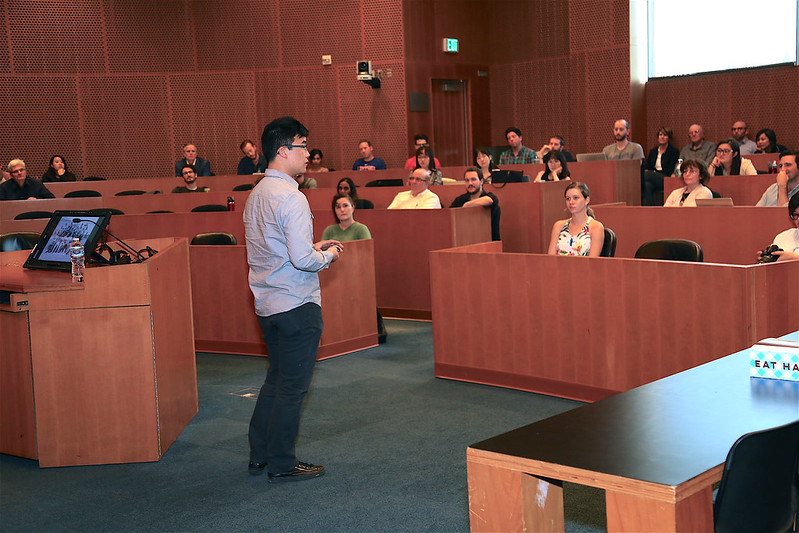