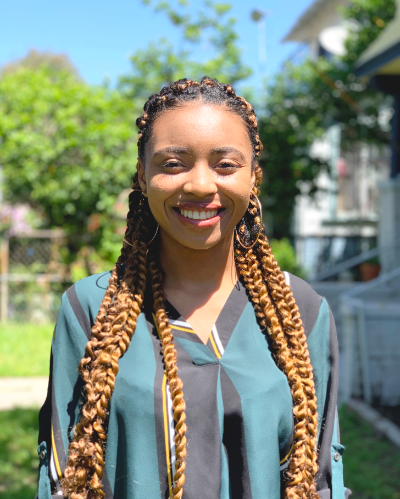 Armed with a brand-new degree in sociology, Serena Miller knew she wanted to help young people caught up in the criminal justice system. She just wasn’t sure how. Then she learned of LMU Loyola Law School’s Master of Science in Legal Studies (MLS) program and the specialization it offers in criminal justice.

“It sounded like a perfect fit for me,” Miller said. “I was interested in learning more about the legal system to add to my sociology background because my career goal is to advocate for juveniles.”

The MLS program gives people — be they new college graduates or established professionals — legal knowledge and analytical skills to advance their education and careers. Students may design their own curriculum from the law school’s wide array of classes or pursue a specialization in such fields as cybersecurity and data privacy, business law, entertainment and new media law, or sports law.

For her focus on criminal justice, Miller has taken Criminal Law and Criminal Procedure. She has complemented those classes with advanced electives such as Sentencing and Post-Conviction Law, team-taught by two professors, and Fact Investigation, taught by two private investigators, one of them also a lawyer.

Miller’s interest in law is fairly nascent. She grew up in Hemet, CA, where her single mother was a teacher with the Head Start program. In high school, she played percussion in the school’s symphonic orchestra, ran track, played piano in the jazz band and captained the drum line during football season.

With a teacher for a mother, she also was a top student. “My mother was very adamant that education must be the forefront of everything I do,” she said.

While an undergraduate at UC Santa Barbara, Miller spent a semester abroad studying advanced sociology at the University of Ghana. The program began with a three-week in-depth tour of the country from the capital Accra, up to the northernmost regions. The entire five months that Miller spent studying abroad enlightened the importance of helping others and finding traces of herself and Black American culture in a place that felt like 'home away from home'.

“It was a very broadening experience for me, being black,” she said.

Her Ghana studies also sparked her interest in criminal justice, particularly courses on juvenile deviant behavior and on penology, which included a tour of a prison.

Those led her to a class on the sociology of law back at Santa Barbara and, soon after, to LMU Loyola Law School.

“I never saw myself in law school because of the stereotype of how hard it is,” she said. MLS students generally take the same classes, and same exams, as JD students.

To Miller’s surprise, she did quite well, earning a 4.60 GPA her first semester — while also holding down a part-time job working with children during the day.

She had to drop the job her second semester, when she took five classes, including Federal Courts, sometimes described as the hardest class at the law school.

Even so, Federal Courts became her favorite. The professors — Simona Grossi, the school’s Theodore A. Bruinsma Fellow, and Alan Ides, who holds the Christopher N. May Chair — made sure Miller understood the complex subject, often working with her outside the classroom.

Grossi also encouraged her to consider entering a JD program herself. The professor also provided contacts and offered to be a reference. “I’ve never experienced such involvement from a professor before,” Miller said.

The law school’s relatively smaller size and compact campus makes getting to know professors easy, she added. “All of them really want to make sure you are prepared in every way.”

Somewhat to her surprise, Miller now is considering going for a JD degree after she graduates. Alternatively, she may look for work as a counselor or case manager for juveniles in trouble. “I want to be able to put my legal knowledge to practical use for the benefit of my community,” she said.

But she would highly recommend Loyola Law School’s MLS program to anyone interested in knowing more about law. “I was so anti-law school, and yet here I am finding myself in a program that’s a perfect fit for me,” she said.

“It’s a great experience, even if you’re not interested in law as a career. I’ve never learned so much so quickly, and what you learn you truly can use in your everyday life.”