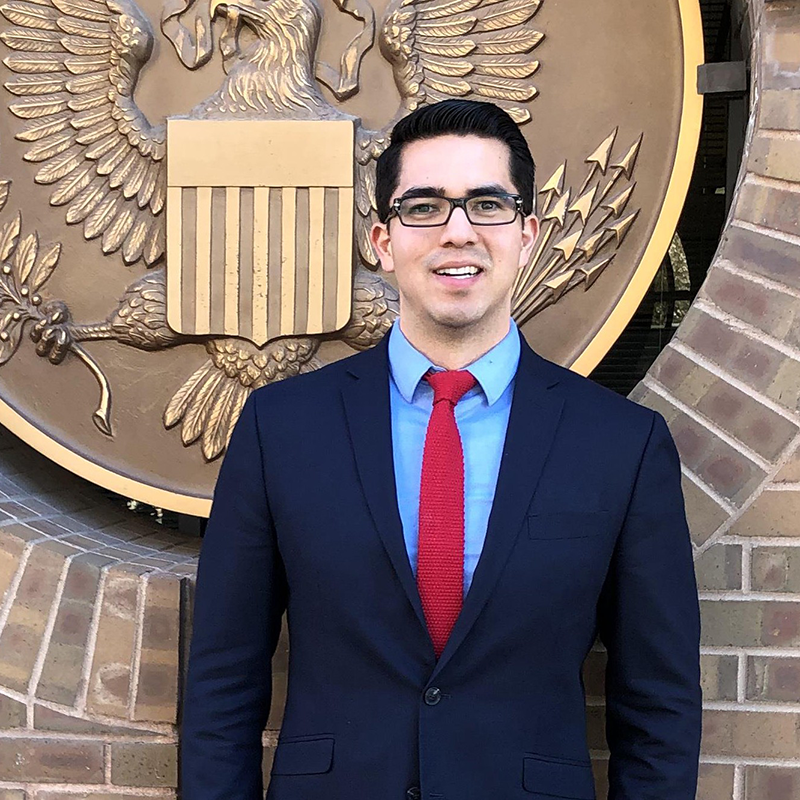 Marco Castellon ’20 began thinking seriously about becoming a lawyer the day his parents were deported. He started studying for the Law School Admission Test in 2014, when the California Supreme Court ruled that someone like him, an undocumented alien, could be admitted to practice law in the state.

Now, as an LMU Loyola Law School student set to graduate this spring, Castellon has successfully represented clients in immigration proceedings both in Los Angeles and in Texas.

“It’s wonderful to give someone something that you can’t have yourself,” he said.

Castellon was three months old when his young parents brought him from Nayarit, Mexico across the desert to California. Starting their new life in Orange County, Castellon and his parents later moved to the Riverside area, where his father came to own a successful breakfast restaurant.

Not long after, as a college sophomore, Castello came home to a darkened house one evening and found his mother alone. Immigration authorities had taken his father and gave his mother just two weeks to arrange for care of the family’s two U.S.-born teenagers before she had to leave the country.

“I’ve had a lot of opportunities that many other people in my position haven’t,” Castellon said about that time. “Yet despite all my education, at that moment I just felt so powerless. My parents did so much to give me a better life, but I felt when they needed me, there was nothing I could do for them.”

Along with an aunt, Castellon watched over his younger brother and sister while also managing the family’s restaurant and studying finance at California State University, Long Beach.

Not long after he graduated, he was able to apply for protection under the Deferred Action for Childhood Arrival program, or DACA. He worked a couple of years in financial management at a bank branch but left to buy and run a small taqueria.

And two years later, Castellon decided to try for law school. “I could see myself opening up another two or three taquerias and having a comfortable life,” he said. “Ultimately, I wanted something more.”

Castellon chose Loyola Law School because he liked the location and the friendly people.

“I also felt it would provide me with the mental challenge that I was looking for,” he said.

After enrolling, Castellon gravitated toward the Loyola Immigrant Justice Clinic (LIJC) after his first week of class when he sought help to renew his DACA status from LIJC Co-Director and Professor Emily Robinson. He later joined the clinic as a student.

As an LIJC advocate, Castellon and a partner represented a woman in obtaining a special visa for crime victims who assist police. Their client’s grandson was shot as the family was driving to an appointment. This year, the two students are helping her become the grandson’s guardian.

Last semester, for the law school’s International Law and the Border Practicum, Castellon and several other students spent a week in El Paso, Texas, where they represented clients before the federal immigration court at the border. Castellon and a partner represented an undocumented woman with some minor misdemeanors on her record seeking to stay in the U.S.

Castellon conceded that he experienced a touch of imposter syndrome appearing in immigration court as an undocumented person himself. “It seemed like the most difficult thing I could possibly do,” he said. “I can’t see anything that can mean more to me than that win.”

Currently, Castellon is reaching out to other undocumented law students in Southern California.

His goal when he goes into practice is to form a small firm of undocumented lawyers who serve the Hispanic community. He wants to help owners of small businesses in the community to organize and successfully operate their companies.

His favorite class at the law school, after all, was Business Planning: Financing the Start-Up Business and Venture Capital Financing, taught by Professor Shannon Treviño, the Patrick J. McDonough Director of the school’s Business Law Practicum.

Learn more about how Loyola Law School equips its students to create the world they want to live in by visiting campus or applying now!