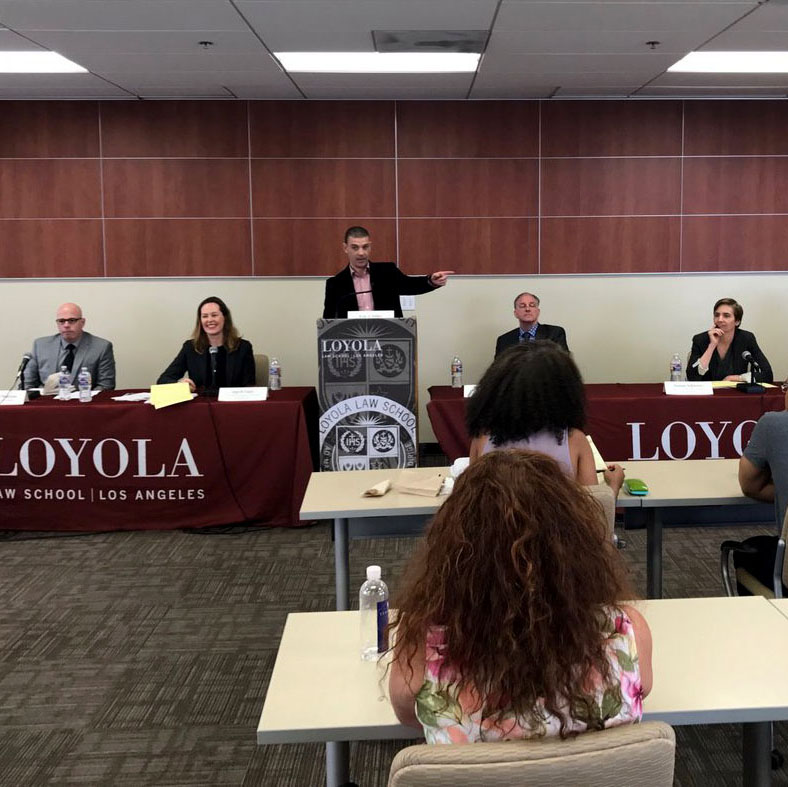 Are privately written police policies in the public interest? It depends on whom you ask, guests learned at the Police Policy-Making event held on Tuesday, Jan. 30, 2018 in the Walter J. Lack Reading Room in the library on Loyola Law School’s downtown L.A. campus.

The first in a series of events entitled “Policing Los Angeles” that will address technology, bail reform, recruitment and other issues, co-creator Professor Eric Miller outlined the genesis of the project. “Los Angeles is the largest police district in the country,” he said. “So what happens in L.A. is significant for us Angelenos but also of national and international significance.”

Police Policy-Making focused on ways in which the formulation of police policy is increasingly assigned to private commercial enterprises. Panelists identified this as an agitator at a time when the public wants to play an even greater role in the process.

“It has never been the history of policing in American that these granular policies have been placed in front of the public and that the public has weighed meaningfully in on them,” said Max Huntsman, inspector general, Los Angeles Sheriff’s Department. “I agree that it needs to happen, and I believe that it’s a fundamental characteristic of a properly functioning democracy and police force.”

“When we do policy, we sometimes forget about the human consequences of those policies,” he said. “There are two ways to do policy: to engage people, and to learn the hard way.”

But speakers noted that while policy formulation may be easier for large, well-resourced police departments, smaller agencies sometimes benefit from a hybrid approach of customizing boilerplate policies. The Gardena Police Department takes such an approach, customizing policies provided to them by policy provider Lexipol.

“If you’re an executive at any civil agency, if you don’t know that the issue of body-worn video viewing is not an important issue you need to look at, then you probably shouldn’t have that job,” said Gardena Police Chief Medrano, suggesting that local departments have a duty to customize provided policies to fit their needs. “The foremost reason you should be implementing a policy that’s updated and current is that it’s the right thing to do.”

Laying a foundation for the discussion were UCLA School of Law Professors Ingrid Eagly and Joanna Schwartz, whose new law review article assesses the state of private policy policy-making. Schwartz pointed out that private policy-making companies like Lexipol would best serve agencies by pointing out policy areas where there exist significantly differing points of view among departments, including police use of force.

“This is a topic about which there is big disagreement,” said Schwartz. She suggested that private drafters could point out in such areas of policy, “’If you are thinking about your policy in this area, here are considerations to take into account,’ in order to make an informed decision to adopt a policy or to go a different route.”