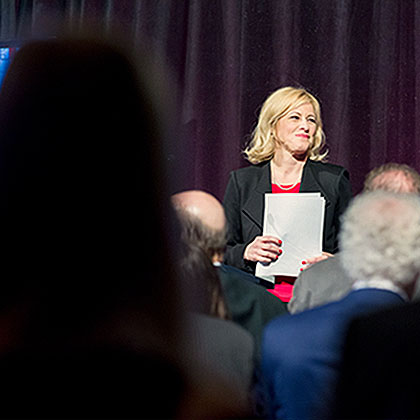 Margaret P. Stevens ’99 took the advocacy skills she learned as a student at Loyola Law School, Los Angeles and applied themto both her practice as founding and managing partner of Daehnke Stevens LLP and her role as president of the Los Angeles County Bar Association.

As a litigator, Stevens honed the skills she gained as a student in both state and federal trial courts, courts of appeals and arbitration in a range of practice areas. Her eponymous firm handles aviation law, business litigation, wage-and-hour violations and an array of torts: consumer fraud, medical malpractice and product liability. In her most recent case, she secured a multimillion dollar settlement as co-counsel for the plaintiff in a wrongful death case involving a helicopter crash.

Stevens has long held important positions in bar organizations. In June, she was installed as president of the Los Angeles County Bar Association. Previously, she served as the group’s trustee, president of its  Barristers young lawyers group, chair of the finance committee and a member of its Judicial Evaluation Committee for gubernatorial judicial appointments.

Despite her busy schedule, Stevens continues to give back to the community. She inspires aspiring litigators by volunteering as a judge for the National Trial Competition, co-sponsored by Loyola Law School and Greene Broillet & Wheeler, LLP. She also plays the clarinet for the Los Angeles Lawyers Philharmonic, conducted by alumnus Gary S. Greene ’75, raising thousands of dollars to benefit those who cannot afford legal services and for other charitable causes.

Prior to attending Loyola Law School, Stevens enjoyed a successful career in public relations and advertising, representing a large number of clients, from nationwide department stores and film studios to hospitals and airports.