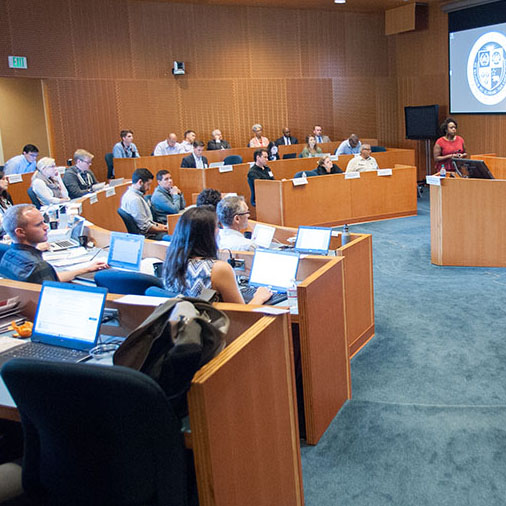 Collectively, Loyola professors left their imprint on thousands of news stories, hundreds of law review articles and dozens of court filings and multiple pieces of testimony to important legislative and administrative bodies. Through their testimony and persuasive briefs, they used their expertise to influence decision-making at the highest levels, including the U.S. House Judiciary Committee and the U.S. Supreme Court.

Facilitating the public’s understanding of the law, Loyola Law School professors provided commentary generating more than 40,000 media mentions in 2017. In summer 2017, the faculty instructed members of the media who participated in the 12th-annual Journalist Law School fellowship, a four-day crash course in the law for those who report on it.

Helping shape law, professors were active in crafting American Law Institute (ALI) restatements, or codifications of case law. Membership of the ALI is highly selected and by invitation only; 11 Loyola faculty members are members. Additionally, Loyola professor wrote amicus briefs in multiple cases – two at the U.S. Supreme Court. Loyola professors’ work was cited in more than 80 filings and decisions from state and federal courts and administrative tribunals.

Thought leaders in their fields, last year Loyola professors put out six casebooks, six practitioner guides and two treatises – with many more on the way in 2018. Additionally, they published 33 different academic articles. At the same time, they were cited in 489 academic articles by other scholars. Meanwhile, they spoke at 24 academic conferences and presented research to at least 15 gatherings of practitioners. They hosted seven different academic workshops or series, maintaining Loyola’s position as a West Coast hub of scholarly dialogue.

Loyola faculty members also played a key role in courts’ interpretation of the law. Professors provided testimony to the House Judiciary Committee, to the U.S. Court of Appeals for Veterans Claims, to the Administrative Conference of the United States and to the Alaska Advisory Committee for the U.S. Commission on Civil Rights.