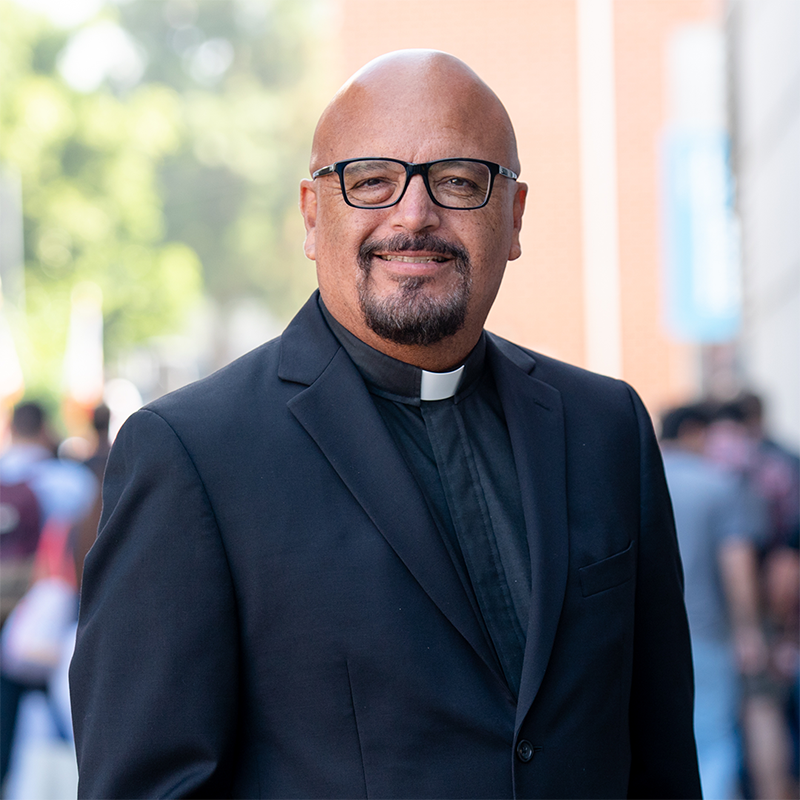 He was spending his junior year abroad at Loyola University Chicago’s John Felice Rome Center when the priest in charge of campus ministry there began offering him one-on-one spiritual counseling and asked him to take on some responsibility in the ministry. Negrete discovered he enjoyed inviting other students into their faith.

It became a transformative experience, he said. “I think that’s really the experience that I’ve carried with me the rest of my life – this attentiveness to the interior life, this discernment of spirit and this involvement in ministry, and particularly campus ministry.”

As Loyola Law School’s chaplain, Negrete presides over the Wednesday noontime Mass in the Chapel of the Advocate. His chief responsibilities, however, are to offer guidance, spiritual direction and what he calls “pastoral conversation” to all members of the Loyola community.

“I’m really loving it,” he said. “The position calls upon my experience and love for pastoral work, spiritual ministry and the sacramental. It touches upon my desire to foster the growth of students and my commitment to the ongoing Ignatian & spiritual formation of faculty, staff and alumni.”

Not surprisingly, Negrete is the product of Catholic education. He grew up in San Fernando, where his father worked for General Motors and his mother volunteered with his schools and later worked for Catholic Charities USA.

He attended Loyola Marymount University in Westchester, where he first encountered Jesuits. “What attracted me was that they seemed to have a depth of spirituality about them that I wanted.” He also was drawn to the freedom and commitment involved in surrendering to the greater good, that is, to being missioned to where the needs are the greatest, he said.

He began his training to join the Jesuits after graduation in 1980. He described the two-year program, known as the novitiate, as Jesuit boot camp.

Next, Negrete studied philosophy for two years at Fordham University and then taught high school social studies in Arizona for three years. Finally, he earned his master’s degrees in divinity and theology in Cambridge, Mass., before being ordained as a priest in 1991.

To his great pleasure, Negrete’s first posting was in campus ministry back home at LMU. Negrete spent one year doing outreach and encouraging students to get involved in community service and three more as the priest in charge of the university’s chapel.

Other assignments have included a dozen years as a parish priest in San Diego and Hollywood, six years as director of spirituality for faculty and staff at Loyola High School and about 18 months in the important post of director of Jesuit vocations for California. In that role, he sought out and supported men who wanted to join the order. “It’s like the admissions director,” he said.

Earlier this year, Negrete returned to LMU as the assistant director of its Center for Ignatian Spirituality. His duties revolve around providing pastoral and spiritual ministry for university faculty and staff, a particular interest of his.

“I think that’s at the heart of working at a Jesuit institution, that the students are the center of what we do — their academic success, their personal development, their ethical and moral development,” the father said. “These are such important moments to help them become the people that God desires them to be for the sake of the community, for the sake of others. They’re going to be the builders of a more just society.”

Negrete said that since taking on the additional role of Loyola Law School chaplain in August, he has seen that same student-centered attitude from all the administrators, faculty and staff.

He has begun meeting with them and with leaders of student organizations to discover the spiritual and pastoral needs of the broad law school community, including alumni. With students in particular, he hopes to foster a spirit of “men and women for others,” in the Jesuit phrase.

He also has begun a program of daily meditations for people at the law school and the Westchester campus. And he has already had opportunities to advise and counsel several faculty members and students.

“I’ve actually been thrilled by the positive response here at the law school,” Negrete said. “It’s a positive sign to me that there’s desire in the Loyola Law School community for more spiritual development opportunities.”