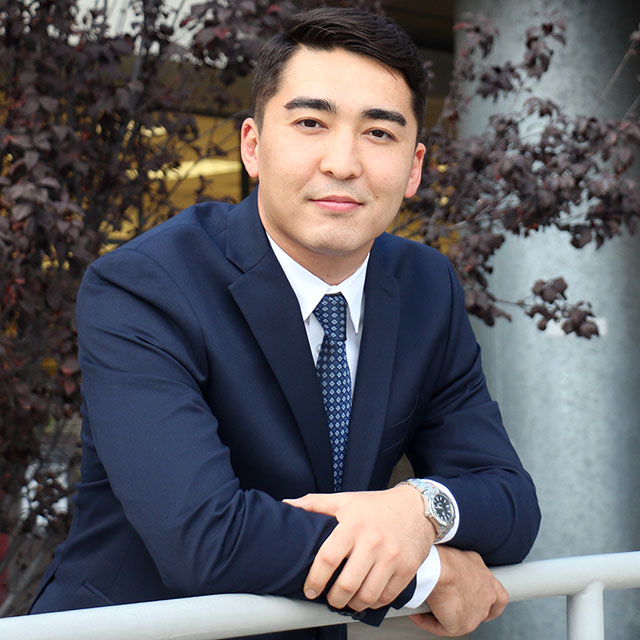 Ruslan Esenov arrived in the United States in 2009 with $54 in his pocket and no luggage. Yet in just a few years, he made his way to Loyola Law School, where he earned not one, but two, LLM degrees that helped him make a difference in his career, and his life.

With the first LLM in 2013, he mastered the U.S. legal system and passed the notoriously difficult California Bar Exam on his first attempt. With the second degree, he pursued a Tax LLM. After he received the second degree in 2017, he accepted a job offer from a Big Four accounting firm Ernst & Young in its tax department.

That character trait is obvious from his early life. He left home at 13 to join the Russian army technical cadet corps, quickly rising to the rank of staff sergeant in command of 100 other cadets before he was 18.

From there, he entered a five-year law program at Saratov University. Within two weeks of graduating, he flew to New York, ready to look for work.

“I took the only job I could get that required no language skills,” Esenov says, which meant he worked as a janitor and in construction, first in New York and then in Savannah, Georgia.

Loyola, he said, offered him a tangible opportunity to become a U.S. lawyer. “The LLM program was great. Taking classes with JD students really helped me get a more in-depth and thorough understanding of U.S. law.” An interest in tax law, dating back to a thesis he wrote for his Russia law degree, helped him gain an internship with a Los Angeles tax litigator as part of the LLM program.

With that background, he entered Loyola’s Tax LLM program and joined the Tax Appeals Assistance Clinic. As part of the clinic, Esenov went up against the state Franchise Tax Board handling cases from inception to appeal. “I had eight active client cases,” he said, “I was working with real people that had real problems. That experience taught me a lot.”

“We would do tax planning both ways,” Esenov said. “We submitted a partner memo every class and received feedback on different case situations. It was the best class I’d ever taken.”

Esenov cited Loyola’s tax professors’ willingness to give students guidance outside of the classroom as a highlight of the program. Visiting Professor David Herzig, who taught the summer Business Tax Intensive class, clarified aspects of the tax law profession for Esenov. Meanwhile, Professor Jennifer Kowal, the director of Loyola’s Tax LLM program, sent Esenov’s résumé to a recruiter and then spent time helping him prepare him for the interview.

“Every professor I encountered in the Tax LLM program was really helpful, especially when it came to counseling and advice on job searches.”

Are you ready to make a difference in your career? Learn more about Loyola’s LLM and Tax LLM programs.