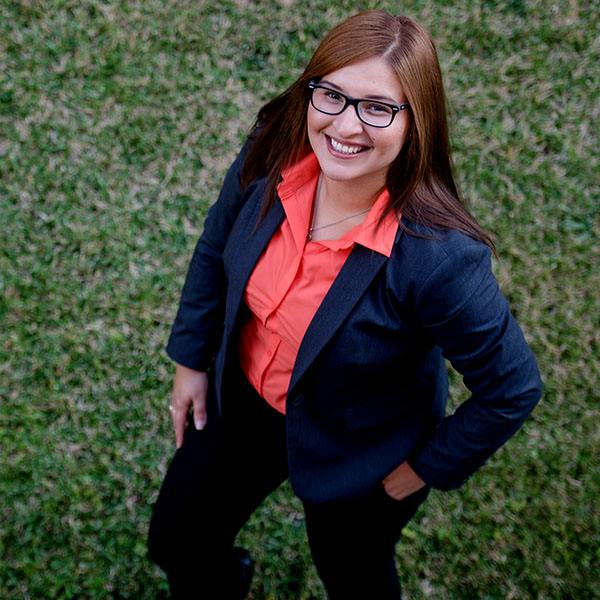 Mercedes Serrano ’17 determined in high school that she wanted to become an immigration attorney. She says Loyola Law School, and particularly its unique Loyola Immigrant Justice Clinic (LIJC), has made that possible.

A native of Sonora, Mexico, Serrano was 12 years old when she and her family moved to Southern California. She learned English so fast and so well that she was the valedictorian of her middle school. But despite doing equally well in high school, she knew her undocumented status would make going to a top college prohibitive.

“I know how it feels to live undocumented in this country,” Serrano says. “I decided I needed to go to law school to one day be able to make a better immigration system.”

But for Serrano, Loyola’s most important draw was the LIJC. While other local law schools have immigration law clinics, Loyola’s was the first in the country that is both housed within its law school and based in its local community. That means students and clinic staff attorneys represent Angelenos seeking immigration relief. Each week, the LIJC conducts client intake in East Los Angeles at Dolores Mission Church and Home Boy Industries.

When she was part of the clinic, Serrano and a partner were able to save a man in his 30s from being deported over a minor drug conviction when he was 18. She negotiated with the government attorney, argued before an immigration judge and won cancellation of her client’s removal proceedings.

“The clinic gives you everything you need to start your career in immigration law,” Serrano says. “It gets your feet really wet.”

The professors, clinic founders and alumna Marissa Montes ’12 and Emily Robinson ’12, train and then deploy their students on a range of tasks. For the classroom component of the program, Serrano and her classmates wrote memos before and after every meeting they had with clients. Montes and Robinson then would give them individual advice about questions to ask and not ask and ways to get to know their clients better.

“They gave us a way to structure our cases, which meant we went to see the client fully prepared,” she says.

Students in the yearlong program also discussed problems with one another during class sessions. “We would debrief our cases and ask questions,” she says. “Sometimes we wouldn’t know what to do, but we could talk with each other and come up with solutions.”

She had a similar experience of sharing while in the Immigration Law class taught by Adjunct Professor Victor Nieblas Pradis, who is a past president of the American Immigration Lawyers Association.

Together, the classes allowed students to build a little community of future immigration lawyers, she says. But beyond the immigration clinic, there was another important reason Serrano chose Loyola over other local law schools: Its Evening Division.

“I am a mom, and I’ve been working my whole life to support myself,” she says. She’s worked as a waitress, a receptionist, an office assistant and a law clerk. “The Evening Division gave me the opportunity to go to school and also take care of my family. Loyola is a great school for that.”

Her most recent job is as a law clerk with a small immigration practice in Los Angeles, where she once again is helping represent clients. Although she is studying for the California Bar Exam now, she will return to the firm soon.

Serrano, who graduated in December, found the job with help from Loyola’s Career Development Office. “Now, it’s going to be my job until who knows when.”

Want to make a difference in your life? Learn how a degree from Loyola Law School, Los Angeles can help. Meet with our Admissions officers at an upcoming event or sit in on a law class.