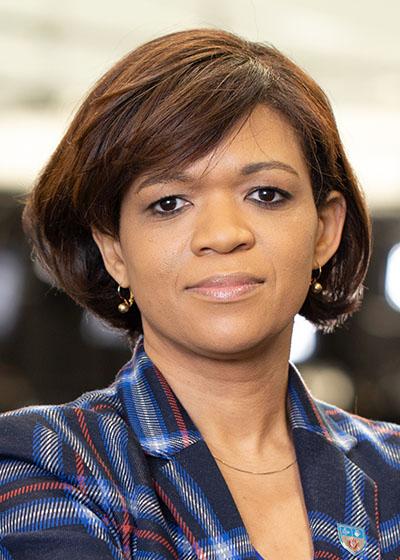 Professor West-Faulcon graduated from Yale Law School where she was a senior editor of the Yale Law Journal.  After law school, she clerked for the Honorable Stephen R. Reinhardt on the Ninth Circuit U.S. Court of Appeals and was one of twenty-five law students selected annually from across the nation by the law firm Skadden, Arps, Slate, Meagher & Flom, LLP to pursue a social justice legal project in the organization of her choice.  Beginning as a Skadden Fellow in the New York office of the NAACP Legal Defense and Educational Fund, Inc (“LDF”*) in 1996, she went on to direct the Los Angeles office of the LDF from 1998 until 2005 as Western Regional Counsel and Director.  Professor West-Faulcon obtained her undergraduate degree Phi Beta Kappa from Duke University, where she graduated summa cum laude, receiving numerous academic honors including the Duke University Faculty Scholar Award and the University Rankin Award for Constitutional Law.  While an undergraduate, she studied the Political Economy and Economic History of Great Britain at Oxford University in Oxford, England.

Professor West-Faulcon began her litigation career as a Skadden Fellow, making her one of a small cadre of lawyers selected annually from across the nation by the law firm Skadden, Arps, Slate, Meagher & Flom to receive a grant to pursue a self-designed legal project in the public interest legal organization of her choice. West-Faulcon chose the New York national headquarters of the NAACP Legal Defense and Educational Fund, Inc. (“LDF”)—the impact civil rights litigation organization founded by Thurgood Marshall.  Beginning as a Skadden Fellow in the New York office of the LDF in 1996, she worked first as an Assistant Counsel and eventually went on to lead the Los Angeles office of the LDF and, beginning at an unusually early stage in her legal career, led the Los Angeles office of LDF as Western Regional Counsel and Western Regional Director-Counsel until 2005.

As an attorney for LDF, West-Faulcon litigated many notable civil rights cases, representing racially diverse classes of clients and working in coalition with lawyers from other civil rights litigation organizations such as MALDEF, APALC, LCCR of the San Francisco Bay Area, and ACLU of Northern California. Her first case out of law school was Erik V. ex rel. Catherine V. v. Causby, an innovative and groundbreaking legal challenge to a high-stakes testing policy in Johnston County, North Carolina on behalf of African American, Latino/a, and white elementary and secondary students wrongly categorized as failing, often over the objections of their teachers, because of the school board’s misuse of standardized test scores. This case became an early template for legal and non-legal advocacy challenging the misuse of standardized tests. Building upon her expertise challenging unfair use of tests, West-Faulcon represented African American and Latino/a students in the Wessmann v. Boston School Committee case filed by the father of a white student seeking to end racial affirmative policies, policies that had been adopted to ameliorate the unjustified racially exclusionary impact of Boston’s elite examination high schools using a single standardized test score as the sole basis for admission. From 1999 to 2003, West-Faulcon was the lead attorney in the post-Proposition 209 lawsuit Castañeda v. Regents of the University of California alleging that the University of California at Berkeley racially discriminated against Latino/a, Filipino American, and African American students in admission after the elimination of its race-based affirmative action policies. She challenged the egregiously racially discriminatory employment practices of international clothing retailer Abercrombie & Fitch as lead counsel for the African American plaintiff class in the successful González v. Abercrombie & Fitch Stores multi-million dollar lawsuit filed jointly on behalf of Asian American, Latino/a, and African American Abercrombie job applicants and employees. West-Faulcon enforced the terms of a Los Angeles Police Department consent decree requiring more racially inclusionary promotional practices to protect the interests of African American, Latino, and Asian American police officers.

In 2005, after close to a decade of leadership on an extraordinary array of high-profile civil rights cases, West-Faulcon departed LDF to teach Constitutional Law at Loyola Law School in Los Angeles where she was honored with the endowed James P. Bradley Chair in Constitutional Law in 2011. West-Faulcon’s research on law and intelligence testing bridges social science and law by examining the legal implications of modern social science research in psychometrics and industrial-organizational psychology, theories of intelligence and merit in employee and student selection, and innovations in the development of more predictive and less racially exclusionary student and employee standardized tests to offer new legal insights.

Among the women featured in the Los Angeles Simon Wiesenthal Museum of Tolerance “Freedom’s Sisters” Exhibit as a “Southern California Freedom’s Sister” in 2011, West-Faulcon’s significant accomplishments have also been praised in the company of other successful lawyers and professionals.  In addition to her selection as a “Southern California Super Lawyer” in 2004, 2005, and 2006 and a “Rising Star Lawyer Under 40” in 2004 by Los Angeles Magazine, she was recognized in the 1999 millennial issue of Ebony magazine as one of Ebony’s “Ten for Tomorrow” (along with Serena Williams, Sean Combs, Chris Rock, Tiger Woods, and U.S. Senator Raphael Warnock) “who will almost certainly redefine their fields in the next millennium.”   In 2012 and 2015, West-Faulcon solo-authored amicus curiae briefs filed in the United States Supreme Court based her expertise relevant to the two iterations of a lawsuit of a rejected Caucasian applicant who alleged that her denial of admission to the University of Texas at Austin constituted racial discrimination (Fisher I and Fisher II).  West-Faulcon has been featured, quoted, and interviewed extensively by national media such as CNN, The New York Times, The Los Angeles Times, The Chronicle of Higher Education, and NPR.  Her legal commentaries have been published in various national media outlets including The Los Angeles Times, The Grio, The Huffington Post, and ScotusBlog.

* Although established by the NAACP, the LDF has been a separate and independent entity since 1940. LDF's founder and first Director-Counsel was the late Supreme Court Justice Thurgood Marshall.