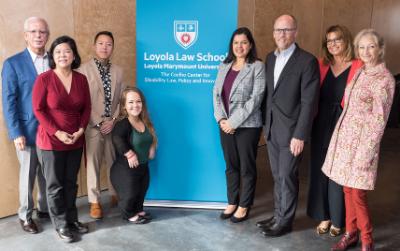 “If we don’t have the right to vote, every other right is truly in jeopardy,” said LMU Loyola Law School Dean Michael Waterstone in his remarks opening “Breaking Barriers to Voting: An Ongoing Advocacy,” the Dec. 18 symposium hosted by The Coelho Center for Disability Law, Policy and Innovation.

That sentiment carried the day during the event hosted on the LMU Playa Vista Campus the day before the DNC Presidential Debate at LMU. The discussion among party leaders, voting-rights experts and other stakeholders examined voting-access issues for members of disenfranchised groups such as ethnic minorities and those with disabilities.

“We must fight to ensure that eligible citizens can express their choice with equal access to the voting booth,” said LMU President Timothy Law Snyder, Ph.D. “What can be more fundamental than that?”

A string of elected officials validated their concerns.

“President Kennedy reminded us that democracy is never done; it is a work in progress,” said former California Secretary of State Debra Bowen, who went on to illustrate her point.

Speakers contemplated the connection between voter suppression and people from disenfranchised communities, including those with disabilities.

Later in the program, DNC Chair Tom Perez vowed to break down such obstacles to voting.

“These are the types of barriers they’re trying to put in place to make it harder to vote," he said. “So many of these have a disproportionate effect on people with disabilities. And that is why it is so critically important for us to step up.”

He continued: “The key to success in taking back our democracy is to build a 50-state infrastructure to organize together. I’m talking about voter protection. We have more voter protection people in place than ever before.”

“Ninety-nine bills have been introduced in 31 states just last year. Critics say are designed to diminish access to the polls. If true, this is decidedly un-American,” said Costello.

“We’re changing voter behavior by going back to the vote model,” said Hoang.

Later, Feng wondered aloud: “We’re a day off from the presidential debates. And I’m hoping one question going forward is, ‘Will they commit to modernizing our election system so that it is inclusive, not exclusive?’”

As it turned out, thanks to The Coelho Center, #DemDebateLMU featured the first question of the first six DNC debates to address disability issues.