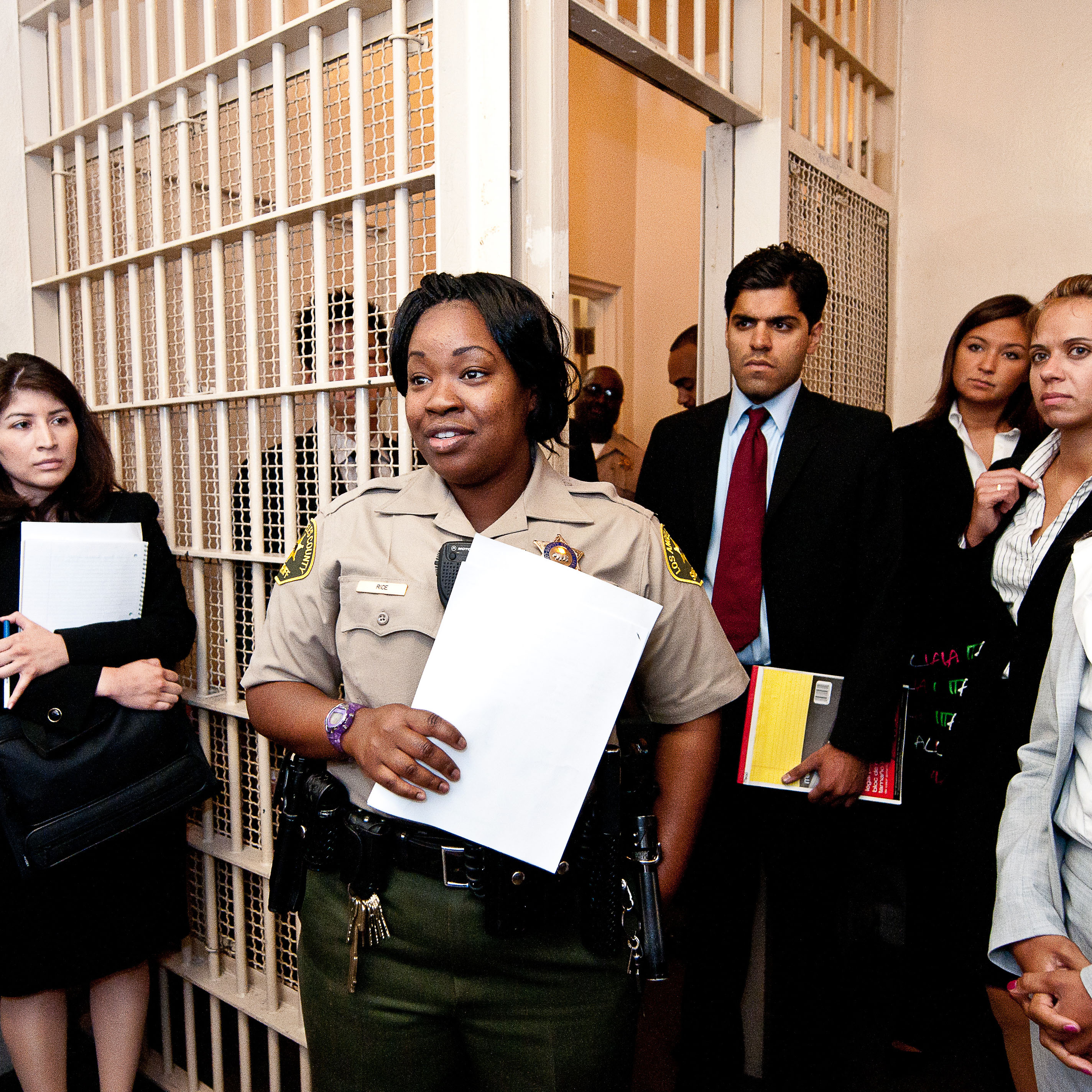 CJLP students tour the confinement facilities at Inglewood Juvenile Courthouse as part of their orientation.

The Center for Juvenile Law & Policy (CJLP) at Loyola Law School, Los Angeles has been awarded a $1 million competitive grant by the Everychild Foundation to develop an innovative program that will train law students in best practices to represent foster youth involved in educational and juvenile justice proceedings.

The unique crossover program, to be called the Everychild Integrated Education & Legal Advocacy Project (EIELAP), will train 36 law students to assist 300 Los Angeles youth over the course of three years. The Loyola students will work as part of a collaborative team that will include education advocates, criminal-defense representatives and social workers. Part of the Everychild grant also will fund the addition of an EIELAP director, staff attorney and social worker.

“Foster youth already have the deck stacked against them when it comes to the criminal justice system,” said Loyola Professor Sean Kennedy, Kaplan & Feldman Executive Director of the CJLP and former Federal Public Defender, Central District of California. “With the Everychild Foundation’s significant help, we have the power to fulfill a critical unmet need: the holistic representation of foster youth who have been charged with crimes. Together, we have the opportunity to secure justice for kids who have traditionally lacked the means to obtain it.”

The EIELAP’s public outreach will include a weekly presence at L.A. County’s primary juvenile dependency court, where students and staff will be performing consultation and client intake with a network of family court operatives. Working to advance the field, the EIELAP also will host bimonthly informational workshops aimed at reaching 1,500 child advocates. A major symposium documenting and dissecting the EIELAP’s findings will be accompanied by a published assessment from a noted authority on social welfare, with the hopes that EIELAP’s documented successes may be replicated elsewhere across the country. The CJLP will present lessons learned from its approach at a capstone symposium on integrated representation.

“We are extremely proud to be associated with this project,” said Jacqueline Caster, Founder and President of the Everychild Foundation. “Crossover children require a strong advocate to assure them the services and opportunities to which they are entitled, but most often denied. Without this support, they are invariably pushed further along the proverbial ‘Pipeline to Adult Prison.’ However, with education proven to be the best vehicle to avoid this trajectory, the Loyola program has the ability to provide brighter futures for generations of children.”

The Everychild Foundation’s mission is to improve the lives of children in the greater L.A. area who are suffering as a result of disease, disability, abuse, neglect or poverty. Each year, the foundation makes one grant of $1 million with funds contributed by members. A successful grant applicant must be a recognized leader in providing services to children and possess an ability to sustain ongoing operations through continued fundraising, among many other criteria. The Everychild Foundation seeks to fund innovative projects that have demonstrated their plans are best suited to solve a critical need of children in L.A. County. The CJLP was one of two finalists for the 2017 grant. More information is available at https://everychildfoundation.org.

About the Center for Juvenile Law & Policy at Loyola Law School, Los Angeles

The Center for Juvenile Law & Policy (CJLP) at Loyola Law School, Los Angeles was created in 2004 to foster systemic reform of the juvenile justice system by participating in and encouraging research, discussion and advocacy in the field and developing policy initiatives for systemic change. It provides a place for stakeholders to meet and discuss issues in an atmosphere that promotes constructive cooperation. The CJLP comprises three clinics: the Juvenile Justice Clinic, which represents youth in the L.A. County juvenile justice system; the Youth Education Justice Clinic, which works to ensure that L.A. County youth receive the educational services to which they are entitled; and the Juvenile Innocence & Fair Sentencing Clinic, which works on behalf of those sentenced to life in prison as youth. Since its inception, the CJLP has trained more than 250 new attorneys and dedicated almost 80,000 pro bono hours to more than 500 children in 1,000-plus delinquency cases in L.A.’s neediest communities. Learn more at www.lls.edu/cjlp.