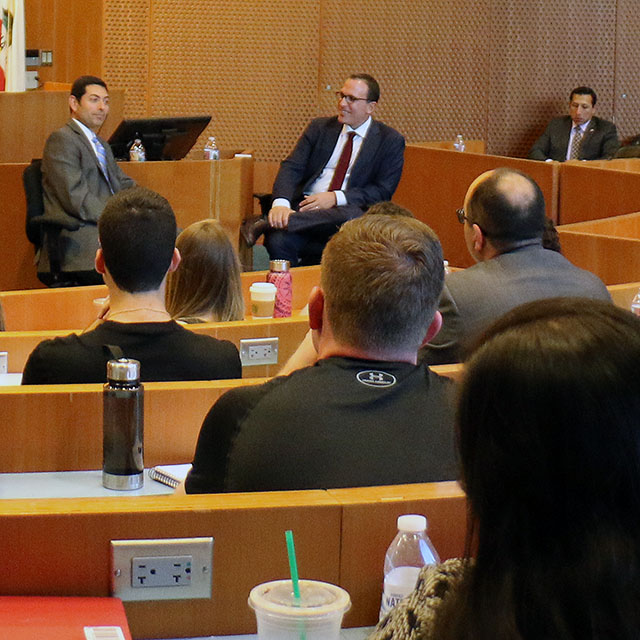 Speaking to a standing-room-only crowd of more than 100 students, alumni and faculty, Cuéllar summarized life on the bench. He provided details of the internal processes of the California Supreme Court, including his methods for drafting opinions and grappling with the issues embedded in cases up for review.

“Frequently, it will be post-oral argument that something has come up that seemed like it was going to be easy to deal with but now I’m not entirely settled on it,” he said. “Do I write a dissent or do I not? Do I join colleagues writing a dissent?”

When queried by Dean Waterstone on the role of law schools in increasing access to justice, Cuéllar gave a nod to Loyola’s legacy of training attorneys for others.

“You’re lucky to be at a law school that is clearly engaged in the community. You can see that with every conversation I’ve ever had with a faculty member, and almost every conversation I‘ve ever had with an alum of this school,” he said. “So you’re starting at a great position already. And that manifests itself in clinics, pro bono projects, the kinds of classes that have a deep theoretical or analytical angle but are also about the practice of law.”

Cuéllar encouraged students in the audience to maintain their enthusiasm for public-interest work after graduation. “My hope is that you leave this law school with the sense that you had some great opportunities to work on access-to-justice issues while you were here and that is Chapter One of a long journey to improve access to the legal system,” he said.

Addressing diversity in the legal profession, Cuéllar urged creative problem-solving. “I’ve thought a lot about the pattern of small choices that make it easier for us to ignore that we’re not at a level of diversity and inclusion that we should be at,” he said. “It’s more of question of, ‘Have we turned over every stone, have we reached out to every person, have we made every person feel included and that they have a stake in the legal system?’”