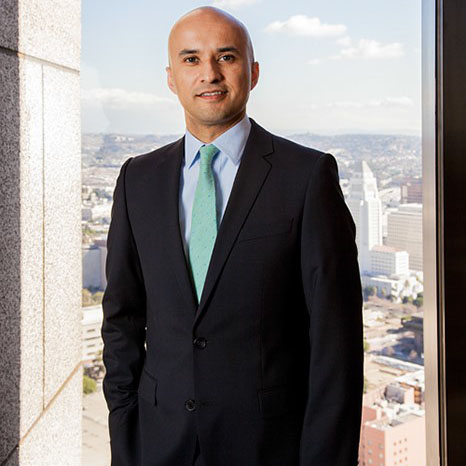 Early during his first year as a Loyola Law School, Los Angeles student, Alfred Fraijo ’02 discovered he could keep his lifelong commitment to social justice while also pursuing a practice focused on sophisticated corporate transactional law. In other words, he could embody the often-quoted Loyola mantra: “do well while doing good.”

Fraijo’s path to the partner ranks at Sheppard, Mullin, Richter & Hampton LLP wasn’t always clear. Raised in the East L.A. neighborhood of Boyle Heights, Fraijo graduated from Harvard University and then returned home to study law at Loyola Law School. His goal was to go into social justice and civil rights work through a legal-aid foundation. Things didn’t go exactly as planned.

During his very first semester, Fraijo was offered a summer internship with the Oakland-based Greenlining Institute to work on an environmental justice project involving contaminated land known as “brownfields.” Dealing with the complex real estate issues involved was eye-opening, and Fraijo saw an opportunity: use business law as a tool to improve the lives of others. “I realized that I could do this private-sector work and still have this social justice impact.”

Fraijo found inspiration for his work in professors like Sande Buhai, the director of the Loyola’s Public Interest Law Department who teaches the Public Interest Seminar, and Gary Williams, who holds the Johnnie L. Cochran, Jr. Chair in Civil Rights. Both faculty members encourage students and alumni to be agile in their ability to make a difference, giving back to the community in any way they can.

Now a noted expert in real estate transactions and land use, Fraijo works with local governments and developers on planning, zoning, entitlements, permitting and financing. His clients have included developers building affordable housing across California.

Through it all, social justice remains Fraijo’s driving passion. “I have been able to use my real estate work on a number of projects creating value for our community,” he says. He is part of his firm’s national diversity and inclusion committee and serves on the executive committee at Sheppard Mullin, a large firm where he is a leader in the firm’s Latin America Practice Group.

Among his many projects outside the office, Fraijo is a founding member of For People of Color Inc., which works to expand diversity in the legal profession, and of Honor PAC, a political action group that promotes Latino LGBT issues.

Along with another community development expert, Fraijo created the Leadership for Urban Renewal Network, a group of young professionals that promotes innovative projects and approaches to community development. He established City Labs Boyle Heights, a community center that incubates and encourages nonprofits and small businesses in East Los Angeles and provides office space for them. Tenants include the first youth LGBT services center in Boyle Heights, called Mi Centro.

“My core focus has always been working with communities and building community-based projects,” he said.

At Loyola, Fraijo also mentors several students, works with the La Raza de Loyola and takes part in the school’s Rock Your Interview program which puts on seminars for students before each law firm interview season. And as yet another testament to his commitment to public service, he established the Alfred J. Fraijo, Sr. Public Interest Stipend Fund at Loyola Law School, which provides critical summer funding to outstanding Loyola Law School students who dedicate their summer to public interest legal work—which generally goes unpaid.

As Fraijo sees it, he’s just stayed true to the school’s guiding mission to be of service. “All of that really started from the kind of service-focused education that I received from Loyola,” Fraijo said.

Do you want to use a JD to make a difference? Attend an info session to learn more about Loyola can help.